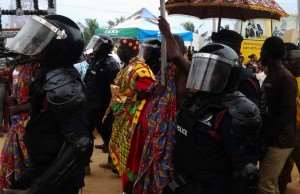 This year's Oguaa Fetu Afahye celebrated by the chiefs and people of Cape Coast in the Central Region, lost its natural beauty as none of the chiefs, including the paramount chief of the area, Osaberima Kwesi Atta II, was seen riding in their palanquins as they usually do.

Traditionally, the chiefs ride in palanquins through the principal streets of Cape Coast every year and then converge at the Jubilee Park where the paramount chief addresses his people and other invited guests.

This year's celebration was characterized by heavy security presence to the dismay of the people, including tourists, who had come to make merry.

DAILY GUIDE gathered that the decision of the traditional rulers to change the pattern this year was to prevent any violent clash as there is a chieftaincy dispute regarding the legitimacy of Osaberima Kwesi Atta II as Omanhen of the Oguaa Traditional Area.

The chiefs, who were spotted at the Ametsemadze Palace, arrived at the park earlier than the members of the Asafo companies, even though they were expected to follow the Asafo groups to the Jubilee Park for the ceremony.

They (chiefs) were escorted to the park by heavily armed police officers – a situation which compelled some of the celebrants to ask whether there was going to be any confusion on the occasion.

Only a few members of the various Asafo companies were allowed to enter the park.

The festival was attended by the Vice President, Mr Paa Kwesi Amissah-Arthur; ministers of state; Members of Parliament; other politicians, President of the Central Regional House of Chiefs, Daasebre Kwebu Ewusi and other dignitaries.

The festival marked the 51st anniversary of its inception and was under the theme, 'Nurturing the younger generation to take the mantle of leadership.'

Addressing the crowd, Mr Amissah-Arthur pledged government's commitment to complete all the uncompleted projects in the area, citing the Kotokuraba Market and the Cape Coast Sports Stadium as examples.

Mr Amissah Arthur called for unity among the people in the area to ensure total development.

Osaberima Atta expressed worry about the deteriorating performance of students at the basic education level in the area, adding that the awful performance had prevented the students from accessing some of the prestigious second cycle schools in the area.

He emphasized the need for parents to collaborate with teachers in improving the performance of the students.