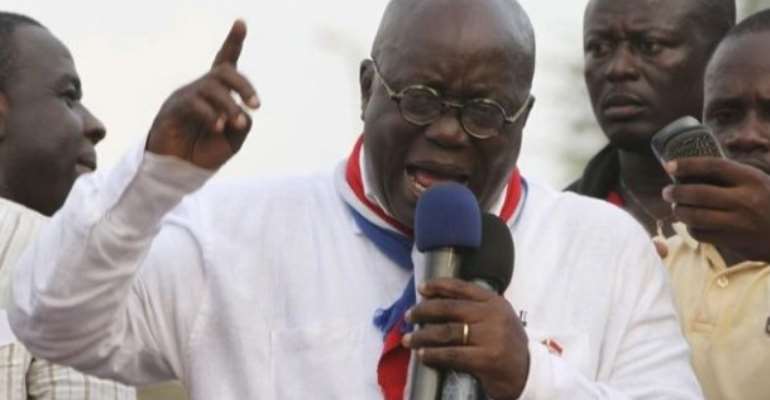 The leadership of the National Democratic Congress has lost the argument on the need for a new voters' register for the 2016 elections, Nana Addo Dankwa Akufo-Addo believes.

The 2016 presidential candidate of the New Patriotic Party argued that with no superior arguments to make, the NDC is now desperately whipping up tribal sentiments against the NPP.

Speaking to constituency executives, parliamentary candidates from the eight constituencies in the Northern Volta zone, as well as NPP supporters and sympathisers in Dambai, on day 2 of his tour of the Volta region, Nana Akufo-Addo expressed utter dismay about the NDC's attempts to ensure that the current voters' register, which, in the opinion of most stakeholders in Ghana, is incurably flawed and unfit for purpose, is maintained for the 2016 polls.

According to Nana Akufo-Addo, the NDC's changing ripostes, after the expose by Dr. Bawumia, his running mate, on the existence of over 76,000 foreigners on Ghana's register proves beyond any reasonable doubt that Ghana needs a new register for next year's polls.

'Originally they (NDC) told us the register from Togo that we presented was fake. That argument has now been abandoned. We then heard about the argument of identical twins. That too has been abandoned. Now we are told the 76,000 matches we found are of NDC people living in Togo and Benin,' he said.

Nana Akufo-Addo stated the current argument being made by the NDC is that the NPP is demanding for a new register because 'we want to discriminate against the Volta region.'

The NPP's demand, according to the NPP flagbearer, 'is about foreigners' on Ghana's register.

'Are the people of the Volta region foreigners in Ghana?' he asked, to which the response from the packed auditorium at the Dambai College of Education was a big 'No'.

The NDC's argument about tribe, according to Akufo-Addo, is because 'there is no argument against what we have said.'

He continued, 'It is not about the Volta region. It is about foreigners. They should not take part in deciding who should be the President of Ghana. Ghanaians, likewise, should not go to Togo to vote in their elections. That is what we are saying.'

Nana Akufo-Addo explained to the gathering that the NPP's call for a new voters' register is nothing strange, considering the fact that a majority of countries on the African continent who have had reasons to doubt the credibility of their voters' roll have, before the holding of elections, compiled new registers.

He cited the case of Nigeria, where before the election that saw General Muhammadu Buhari emerge victorious, a new, credible voters' register was compiled. Cote d'Ivoire and Tanzania, who will be going to the polls later this year, according to Nana Akufo-Addo, have all completed the compilation of new voter registers.

'In Togo, it is our own Excellency, President John Dramani Mahama, who gave them a 'new' register. The opposition complained to him, as Chairman of ECOWAS. He went to Togo and asked the authorities, namely the President and the Electoral Commission, in Togo that they should postpone the election, so work can be done to satisfy the concerns of the opposition. That was done, and the opposition leader accepted the register and went into the elections with it. What is good for Togo is good for Ghana,' he stated.