Akufo-Addo Should Not Give Mixed Signals 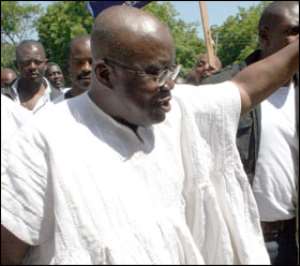 On the hustings in the Volta Region, under his “Arise and Build” theme, in the lead-up to Election 2016, recently, the Presidential Candidate of the main opposition New Patriotic Party (NPP), Nana Addo Dankwa Akufo-Addo, noted that 18 of the 19 constituencies where the voting gap between the ruling National Democratic Congress (NDC) and the NPP is 70-percent or higher are in the Volta Region.

He therefore called on the staunch NPP members and supporters of the region to rally and help the Elephant Party close up the gap, so as to enable Ghana’s former Foreign Minister constitute the next government come January 2017 (See “Let’s Close the Gap in 2016 – Akufo-Addo Tells Volta NPP” Starrfmonline.com / Ghanaweb.com 9/4/15).

It is quite understandable that Ghana’s main opposition leader should call for the closing of the gaping electoral gap between the country’s two major parties, particularly since the Volta Region is also widely considered to be the hermetic stronghold of the National Democratic Congress and the voting pattern in this region is dispiritingly skewed against the New Patriotic Party. The problem here, though, is that not quite a while ago, Dr. Mahamudu Bawumia, Akufo-Addo’s three-time running-mate and former Deputy-Governor of the country’s central treasury, the Bank of Ghana, led a team of experts to conduct a forensic investigation of the national Voters’ Register which uncovered a humongous packing of Togolese nationals onto Ghana’s Voter’s Register. The Bawumia Team claimed that the problem was quite widespread across the country, especially in border town areas between Ghana and its three neighboring countries, namely, Togo, Burkina Faso and Cote d’Ivoire (Ivory Coast).

Significantly, however, it was the case of the Volta Region that was highlighted far more than anywhere else, in particular the Ketu-South Constituency which is represented in parliament by Mr. Fiifi Kwetey, who also currently doubles as the country’s Minister for Agriculture. What is more, Nana Akufo-Addo has been vigorously campaigning for the scrapping of the current Voters’ Register and the latter’s replacement with a new one altogether. And here, also, ought to be recalled the fact that nearly 80,000 Togolese registrants were also reportedly found to be on Ghana’s Voters’ Register. Nana Akufo-Addo and Dr. Bawumia have also taken their complaint on tour to such ECOWAS countries as Togo and Nigeria. The duo avoided President Yayi Boni’s Republic of Benin, obviously because the Benin leader is widely known to tread in lockstep with his Ghanaian counterpart when it comes to the sensitive subject of electoral disputes in Ghana.

For all anyone cares to know, President Yayi Boni may well be an honorary citizen of Ghana and a Mahama-voting member of the National Democratic Congress. The point I am clearly trying to make here is that it is rather curious for Nana Akufo-Addo to make a convincing case to the effect that the yawning gap between Ghana’s two major parties is largely the result of the criminal packing of the country’s Voters’ Register by foreign nationals from the West African sub-region, and then make a one-hundred-and-eighty-degree turn to quizzically suggest that such gap may, after all, be due to the fact of the New Patriotic Party’s not having made a strong enough case to the voters of the Volta Region in order to sway them into siding with the relatively more progressive camp of the NPP. This trend of political campaigning on the part of Nana Akufo-Addo sounds unmistakably confusing.

In other words, the clear implication of Akufo-Addo’s argument here is that heavily and critically packed with Togolese citizens or not, the wide electoral margin between the NDC and the NPP in the Volta Region would fairly remain the same, short of the NPP leader’s making a strong and convincing case for the Volta Region’s electorate to seismically shift the balance of its allegiance from the NDC to the NPP. This kind of lame argumentation uncomfortably vindicates Kenya’s Prof. P. L. O. Lumumba’s counter-argument that not only is such perceived electoral anomaly not unique to Ghana, but that it also has absolutely no remarkable significance on the outcome of general elections in those inconveniently demarcated African countries in which this problem occurs.

If he sincerely believes that the illegal packing of the country’s Voters’ Register with Togolese nationals makes absolutely no difference in the gaping electoral margin between the National Democratic Congress and the New Patriotic Party in the Volta Region, mischievously dubbed the NDC’s World Bank, then, of course, Nana Akufo-Addo would be better off steering clear of any pronouncements that are likely to spark national controversy over practically nothing!