C K Gyamfi Was Ghana's Most Intelligent Player Ever 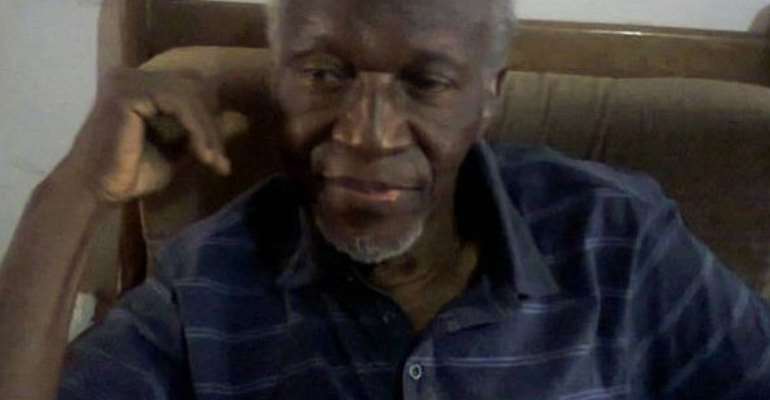 Some footballers are good in the game but not too intelligent as persons.

Others are intelligent human beings but not too good at the game itself.

To be an intelligent footballer is thus a very rare combination.

Except one case - that of C K Gyamfi, who won the African Nations Cup for Ghana three good times. Sadly, he was gathered to his fathers on September 2, 2015, aged 86.

I first heard of him by word of mouth. A well-travelled guy in our village, who used to bend our ears with long stories about what he had seen 'abroad' (by which he usually meant Accra and Kumasi) said he had seen Gyamfi play for Asante Kotoko in Kumasi and described him to us as follows: 'He is of medium height - almost short - but very well-balanced. He’s got very nimble feet. He plays in the mid-field, and it is he who distributes the ball to Kotoko’s strikers, Kwaku Dua and James Agyei, who score the s way that have made them famous. He can, almost instinctively, foretell where Kwaku Dua or Agyei will run to, and he places the ball there to meet them. But sometimes, Gyamfi takes the ball forward himself, and is able to dribble past one or two players and then, shoot! By surprising the opposing goalkeepers, he manages to score many goals.'

Having heard so much about Gyamfi, I thought heaven itself had come to earth when, in 1954, Gyamfi came to play at Old Tafo, a few miles from Asiakwa, my home town.

Gyamfi was outdooring a new club he had formed, Great Ashantis. They played against Accra Great Olympics, another newly-formed team. The outcome of the match was greatly anticipated throughout Ghana, for Great Ashantis (Gyamfi’s team) had been born as a result of a split within Kumasi Asante Kotoko (Gyamfi’s old team) while Great Olympics had similarly been spawned by malcontents from an old team called Accra Standfast.

The match lived up to its billing, and although Great Ashantis won, Olympics gave a very good account of themselves. Despite the odds, both clubs survived to participate in the Ghana leagues for many years after that initial outing.

CK Gyamfi was born in Accra in 1929 to Nana Kumi Bredo I, chief of Okorasi in the Akwapim Traditional Area. His mother was called Diana Dodoowa Dodoo of Accra. He began playing football at an early age, and soon became part of the School Eleven of Okoradi Junior School, playing regularly among boys who were much bigger and taller than he was.

In 1944, Gyamfi’s family moved to Accra. His parents tried to find a school for him. The school they chose was Accra Royal, but admissions had closed. However, Gyamfi, using the intelligence I have said he possessed, sought out the school’s football coach. He told the coach that he could 'play better' than most of his players!

Intrigued, the coach asked Gyamfi to participate in a match. Gyamfi exceeded all the coach’s expectations and he took Gyamfi to the headmaster and got him given immediate admission.

After completing his education, Gyamfi played for such clubs as Koforidua Sailors, from where he was pinched by Cape Coast Mysterious Dwarfs, who lost him to Kumasi Asante Kotoko.

Gyamfi played for Kotoko from 1949 until 1954, when he recruited some players from Kumasi and elsewhere to form a new team called Great Ashantis. He was only 29. Now, managing a football club and playing in it the same time poses serious challenges to the best of men (ask Ruud Gullitt, an excellent footballer who came adrift when placed in such a position at Chelsea.)

But Great Ashantis, under Gyamfi, rose high: I was witness to its growth when, in the first major match ever played at Asiakwa, Great Ashantis thrashed its 'mother club', Kotoko.

Gyamfi was picked for the Gold Coast XI that toured England and Ireland in 1951. The Ghanaians, badly served by the tour operators, played in their bare feet whilst their opponents wore boots! Clearly, they should have been made to practise playing in boots at home, before being sent abroad! The barefoot players however managed to score a total of 25 goals, with Gyamfi accounting for 11 of them. Gyamfi procured a pair of boots for himself and when he returned home, he tried to get boots adopted by the country’s teams. He was joined in the campaign by another national team member, the indomitable defender, E C Bryant. Eventually, every team in the country adopted boots.

Gyamfi was once asked what his most memorable match was. He recalled the 1953 encounter between the Gold Coast and Nigeria, part of the (then) regular competition that took place between the two countries each year.

Gyamfi said: “The Jalco Cup was at stake and the match was heading for a draw, which would have given Nigeria the Cup. Suddenly, a cross came to me and I controlled the ball and dribbled a defender before shooting - with my unfamiliar left foot! I feared the worst but the ball went into the net! There was absolute glee in the whole country!'

In 1960, Gyamfi played for Ghana against a visiting team from the [West] German Bundesliga called Fortuna Dusseldorf. He so impressed the Germans that they asked him to play professional football for them in Germany. This was the first time a Ghanaian was leaving amateur football to become a pro. In his debut match, Gyamfi scored. The Fortuna Dusseldorf fans nicknamed him 'Tunda!' (Thunder) in appreciation of his shooting power.

But Gyamfi was called back home in 1961 and sent on a coaching course to East Germany. On his return, he was appointed Assistant Coach of Ghana, to understudy a Hungarian coach called Joseph Ember. Ember left Ghana in 1962, whereupon C K Gyamfi became National Coach. His first task was to prepare the Black Stars for the African Cup of Nations, which Ghana was to host for the first time in 1963.

Not only did the Black Stars win the African Cup at home but also, Gyamfi successfully retained the Cup in 1965, playing away in Tunisia (in a legendary match that was heading for a draw until a young wizard of a player that Gyamfi had brought into the team - called Osei Kofi - netted the winner in the last minuter.)

Gyamfi was again in charge of the Black Stars when they beat the hosts, Libya, in Tripoli in 1982 (in a match that Ghanaians feared would be 'thrown' to Libya because Ghana’s new ruler, Jerry Rawlings, enjoyed very close relations with Libya’s leader, the late Col. Muammar Gaddafi. But Ghana won by 7 goals to 6 in penalties. Gyamfi thus became a three-time winner of the African Cup of Nations for Ghana. (In all, Ghana has won the Cup four times.)

Gyamfi was a royal of Okorasi, his birthplace, and when the stool of the town became vacant in 1999, the people, in accordance with their custom, enstooled Gyamfi as their chief. His e stool name was Nana Gyamfi Kumi I. Gyamfi had a mild stroke a few years ago and spent the rest of his life quietly with his wife, Madam Valerie Quartey Gyamfi, a former national tennis player. They have been blessed with eight sons, who are all working in Europe and America.

Rest In Peace, Nana Gyamfi, Magic Feet. You’ve done all that a Man could be expected to do for his Nation!