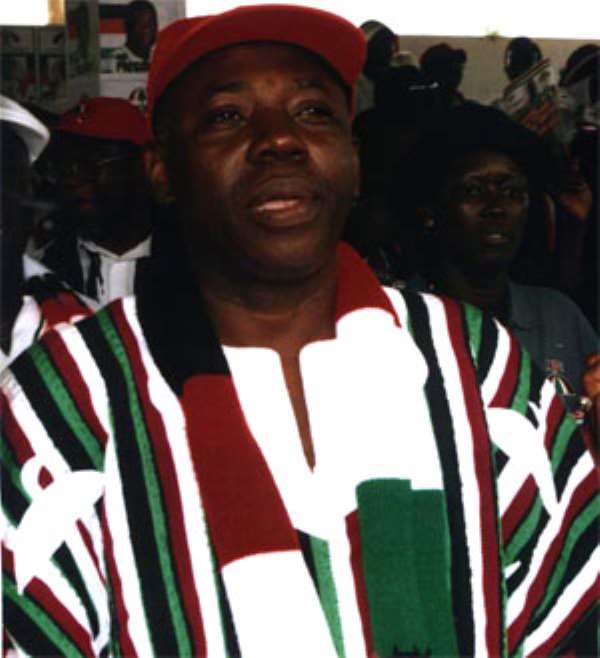 Mysterious female employee of parliament may hold the key and after Asamoah-Boateng and Hawa Yakubu fiascos would it be safe for the VP to attempt a visit? By Friday last week rumour had spread all over the national capital that NDC running mate, Lawyer Mumuni had vanished from the 37 Military Hospital.

There was much concern because his accident had already been politicized and should he be declared truly missing, then abduction would be added by the NDC to their claims of attempted assassination.

By late evening, the running mate's whereabouts had been traced to Korle Bu Teaching Hospital where he had been transferred. ADM has information that from Korle Bu he would be sent to Koforidua Orthopedic Hospital and then to the north to try other remedies so as to get back on his feet early enough to join his party's campaign.

But where was he coming from or going to when he had the accident that has been so politicized by his party? ADM can confirm that it was not a summons from Rawlings or Mills that kept him out so late. Neither was it a consultation with any of the marabous the NDC is rumoured to have imported from Mali, Senegal, Burkina Faso and the Sudan to help with the fortunes of the party.

One of these marabous is even said to be one-eyed and considered very powerful. No, even he had nothing to do with the running mate's ungodly hours on quiet highways.

Though NDC spinners like Dr. Josiah Aryeh and Rojo Mettle Nunoo have been shouting from rooftops that they suspect foul play with NPP complicity, ADM has received rather tantalizing information that a female employee of Ghana's sovereign parliament may after all have been the cause of the running mate's mysterious accident.

The information says she lives in Adenta and she may one way or the other have distracted the running mate's attention that early hour leading to his accident. Her name is being withheld. She may yet play a central role in resolving this bizarre incident.

The Honourable Madam Hawa Yakubu may after all also have a point when she called for a commission of inquiry.

After the police investigations into the accident, a commission of inquiry could as well also look into the NDC claim of assassination attempt and what role the young woman in Adenta played in it.

Meanwhile, at the time of writing last Friday, ADM was receiving information from sources close to Vice President Aliu Mahama (who was expected in town after attending the UN General Assembly) to the effect that there was debate as to whether the Vice President should "take the risk" of going to visit his "contriman" in hospital.

This is because attempts by some senior NPP members to visit the NDC running mate were rebuffed almost violently. The Honourable Hawa Yakubu was hooted out of sight when she went to express her sympathies and Mr. Asamoah-Boateng, Deputy Minister of Information was almost set upon by thugs when he went with flowers to show sympathy.

Said a Vice Presidential Aide to ADM, "We cannot allow the VP to go and be harmed one way or the other by NDC thugs. They have show that they are capable, with what they did to Hawa and Asamoah-Boateng".

Others also believe that if the VP has to take a contingent of policemen or soldiers to protect him, he would have to do that and visit his Dagomba compatriot.

While this sideshow is playing, the main show involving the running mate and the lady at Adenta promises real fun and games!