A Nation In Agony 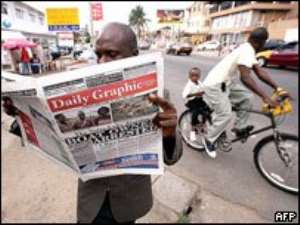 The economy forms an integral part of every country where development remains paramount and is projected over a given period of time. Sadly, over dependencies on foreign aid and imports have made it rather cumbersome for most developing economies like Ghana to be progressive.

Local industries folding up due to insufficient or lack of raw materials to sustain production.

To boost Ghana's economy a lot of investment has to be made regarding our local industries, agricultural made attractive to the youth with ready market for goods produced at flexible rates for both the consumer and the producer alike with a lot of our consumables locally made. Most of our problems emanate from borrowing and importing goods we should be able to produce on our very own with the right investments.

It still remains very shocking to me as to why we, as a country should import every little thing we should and could produce on our own e.g tomatoes (both fresh and paste ), onions, rice, chicken, and other consumables.

What special equipments are needed to produce these that government can not fund?

I believe every time an import is made, it invariably means 'unemployment has been imported' because someone would lose market over that and consequently would lead to the person folding up hence his quota of contribution to the national GDP is dwindled whilst the importer makes cash to boost his economy and GDP as income made from abroad. The fundamental reason why most African countries will continue to longish and lavish in abject poverty is their over reliance on imported goods.

Interestingly, only about 5% of America's population are farmers. The rest are service based, yet America is able to produce rice to feed most African countries for decades. Now, would you then wonder blindly why their economy seems more vibrant and progressive every now and then?

Most farmers in Ghana are peasant farmers who don't farm on commercial basis. They only farm to feed their families. When we criticize government, we should as well question our integrity as a people who give thought. When government subsidized the price of fertilizer to boost the agricultural sector most of our brothers smuggled it into neighbouring countries for ready cash. How then would the agric sector boom?

Exporting unfinished goods only means one thing; little money is being made hence retrogressive economy and poverty continuity unabated. I'm looking at a system where most if not all our raw materials like gold, cocoa, bauxite, timber, sheanut etc. we export could be finished or at least semi finished to gain more income. I won't take you far for a classic example, lets take yam. Supposing you go to buy a tuber of yam for Gh¢1.00, you come and process it by way of frying and packaging it into yam chips to resell, won't you make more money than the initial investment? If so, can you imagine if our cocoa, gold and other mineral were processed and exported how much we would earn instead of the unprocessed state?

This brings us back to the required industries to process these raw material into semi finished or finished products. Where are the requisite industries? I'd always hold high the name of the Late Osagyefo Dr Kwame Nkrumah for being a proactive thinker one who can't be replaced. As far back when Ghana never thought of discovering Oil, this man was thinking of building the tema oil refinery, wow! Today the prices of fuel continue to soar and sky rocket every now and then because as a country we don't buy the crude oil to process on our own, we rather buy it in the finished state. In basic business we all know profit equals selling price less cost price which in this case to maximize profit the selling price would inevitably be higher than the cost price. Shockingly, the tema oil refinery is fully functional enough to be able to refine the crude oil to serve Ghanaians at a subsidized rate with exponential benefits like kerozine, diesel, coal etc. It's no secret any thing bought in the raw state is relatively cheaper than the finished state. The reason behind our soaring fuel prices.

I've always maintained that, taking loans is not a bad thing at all, rather what the loans are used for is what remains the puzzle in most developing economies. Loans, when subjected to the right use and investment would naturally payoff itself within the shortest possible time or long run with little or no stress at all. Inflation on the rise every now and then yet we hope to stabilize the cedi? How so, if we continue to import foreign goods who make a lot of income which isn't sustained in the country but taken back to their respective countries. I'm looking at the circular flow of income where households provide the firms with factors of production and the firms provide households with goods and services. This way money stays in the country and when money stays in the country the economy is boomed and when the economy is boomed the cedi will be stabilized and when the cedi stabilized inflation will be minimal and when inflation is minimal then the standard of living of the average Ghanaian would be elevated.

Economics is all about assumptions. If so, let's assume government makes massive investment into the agric sector, for example, poultry. I'm imagining a possible situation where poultry production becomes one of governments top priorities where farmers are equipped to produce poultry fowl meat not only to feed the Ghanaian population but to export for revenue generation. This way, lots of jobs will be created to employ a lot of people who will pay taxes and we talking about indirect and direct taxes. They will spend in the country so I see this as a win win situation where goverment makes revenue from exports and create jobs for the people.

Imagine government pumps tonnes of money into tomato production as well us set up large industry plants to process them into tomato paste that cut down cost of importation on tomatoes again, jobs will be created and income will be generated for government when exported to other countries. National GDP will be boosted and money stays in the country. Mr Kojo Sarfo Kantanka has made massive progress in his car collection lately so, I'm looking at a possible ban on importation of goods including cars where government would support his course to make it substantive enough to employ a lot of people and make additional income should these cars be exported across our borders, I foresee our GDP once again rising and our economy booming.

My name is Abdul Rafiq a student of life who believes if the above is taken into cognizance, our standard of living as Ghanaian citizenry will be raised.