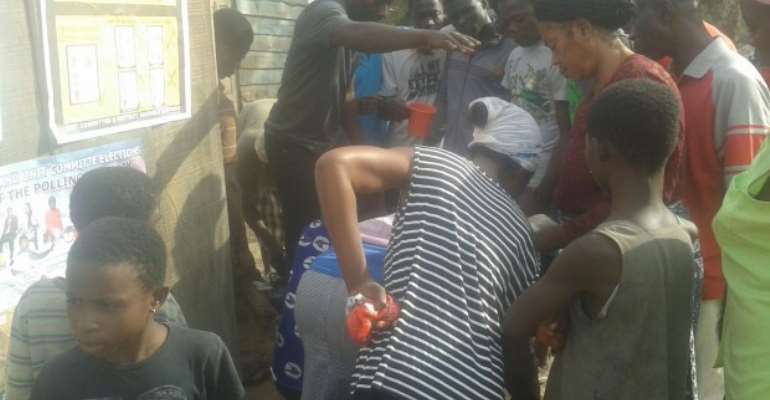 THE USUAL apathy towards district level elections reared its ugly head once again in yesterday's polls, compelling some aspiring assemblymen in Kumasi to move from house to house to openly beg people to go cast their ballots.

Residents of the various electoral areas in Kumasi and nearby communities, as predicted by political pundits, failed to participate in the district level elections, to the chagrin of the various contestants who were in dire need of votes to win the polls.

Voting commenced in most of the electoral areas in the city at exactly 7am, with the centres virtually empty and quiet. The apathy towards this important national exercise forced some of the desperate-looking aspirants to visit some houses within their areas to appeal to people to go to voting centres and exercise their franchise.

DAILY GUIDE gathered that some of the aspirants, who perhaps were hankering for victory, even went to the extent of making financial and other mouth-watering promises to the people to entice them to leave their workplaces and homes and go and vote for them.

Other aspiring assemblymen allegedly used cooked food and drinks as bait to attract some voters to the voting centres. Some of them were said to have made unrealistic promises to the electorate at the last minute just to convince them to take part in the polls.

Timely Intervention
The timely intervention of the aspirants contributed significantly to motivating some of the people who, from all indications had no intention of taking part in the polls, to go cast their votes at the eleventh hour.

Despite this, most of the polling centres the paper visited in the Garden City still looked virtually empty, as the Electoral Commission (EC) officials were spotted sitting idle.

Most of the residents of Kumasi and the nearby areas insisted that they refused to exercise their franchise because they had no interest in the district level elections; hence, their apathy towards the electoral process.

Kwadwo Awuah, a car mechanic at Krofrom, said people refused to take part in the polls because the day was not declared a national holiday.

'Things are difficult in the country so nobody will leave his work just to queue and vote for an assemblyman,' he said.

Helena Duku, another resident, said the decision of the state not to declare the voting day a holiday sent a strong signal to the people that the district level election was not an important exercise, adding, 'and this, for me, contributed to people turning their backs on the process.'

Partisan Politics
Akwasi Kyei, the Ashanti Regional New Patriotic Party (NPP) Communication Director, who expressed grave concern about the apathy towards the elections in the region, stated that it was about time district level elections were made partisan.

He argued that the fact that the president elects the district chief executive and also appoints about 30 percent of members of the assembly indicates that the district level elections in practice are partisan, adding, 'and we should be bold to make it official.'

Meanwhile, reports suggest that people in about seven polling stations at Kenyasi West Electoral Area could not vote on Tuesday as the EC postponed the polls because one of the unit committee aspirants did not have his name and picture on the ballot paper.