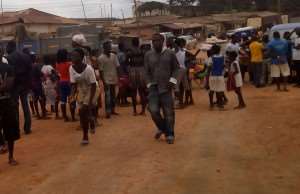 Some of the aggrieved residents Kansaworodo
There was pandemonium at Kansaworodo in the Sekondi-Takoradi Metropolis of the Western Region when some of the residents in the farming community staged a protest at some polling centres during the district level elections yesterday.

The protesters vowed not to vote and threatened not to allow anybody from the area to take part in the elections in the community.

The angry residents claimed that their preferred candidate, one Nana Adjei – the immediate past assembly man for the area – was disqualified at the eleventh hour by the Electoral Commission (EC) without any tangible reason.

Nana Adjei was in the contest with three others – Mathew Kweku Adams, Atopetu Kobina and Emmanuel Ackon.

Speaking to DAILY GUIDE as to why Nana Adjei was disqualified, Stephen Opoku-Mensah, Western Regional Director of the EC, explained that he (Nana Adjei), who was seeking re-election, was disqualified because he is an ex-convict.

He noted that the disqualified assembly man was charged for contempt of court and was sentenced to a week's imprisonment by a Sekondi high court on July 14, 2015.

According to him, per the country's Constitution, such a person could not contest in the assembly elections until after 10 years.

The residents, numbering over 500, poured onto the streets, converged at some polling centres and set lorry tyres ablaze amidst chanting of war songs.

They also nailed boards on some electricity poles in the area with the inscription, “Today No Vote.”

It took the intervention of personnel of the Rapid Deployment Force of the Ghana Police Service to calm the residents down and allowed people who wanted to vote, to cast their ballots.

Interestingly, the disqualified assembly man had his photograph on the ballot paper but the thumb print column was crossed with blue ink, indicating that he was disqualified.

As at the time DAILY GUIDE was leaving the RC Primary West polling station at Kansaworodo (at about 9:26 am), only five people had cast their ballots out of the 998 registered voters, according to the Presiding Officer, James Freeman Gibah.

Generally, yesterday's district assembly and unit committee elections in the Sekondi-Takoradi Metropolis experienced a low turnout as most voters showed less interest in the exercise.

Polling centres visited by DAILY GUIDE had received all their election materials while security personnel were also at post, but the prospective voters were not turning up.

Some voters interviewed were of the opinion that assembly members had not been able to contribute positively to the development of their communities hence, the apathy towards the elections.

At City Council Hall 'A' at Amanful East, the Presiding Officer, George Krah, disclosed that 62 voters had cast their ballots at 12 noon, out of the 639 people expected to ballot.

The situation was not different at Airport Ridge electoral area 'B' where the Presiding Officer, Mr Azankpo, revealed that 17 out of the 557 voters had balloted.

The Deputy Western Regional Minister, Alfred Ekow Gyan, who visited some of the polling centres to inspect the situations there, was worried at the general apathy on the part of the people towards the elections.