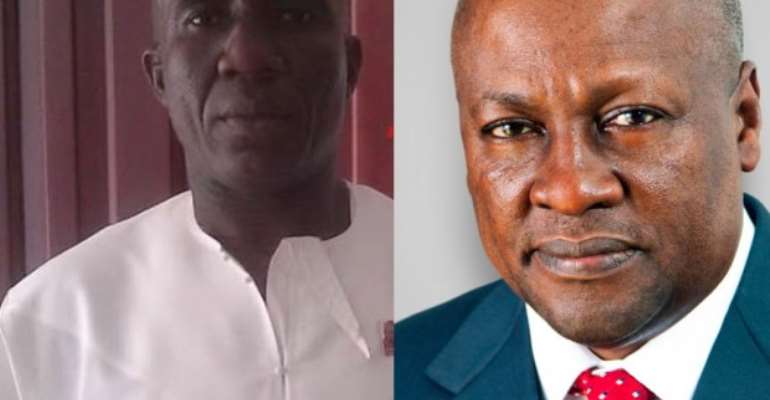 The NDC set November 7, 2015 for its presidential and parliamentary primaries which had since generated a lot of interest, with speculations that President Mahama was going unchallenged.

Even before nominations were open, leading members of the party including Vice Chairman Samuel Ofosu Ampofo and Majority Leader Alban Kingsford Sumana Bagbin asked that nobody contests the President, since that would be tantamount to raising questions about his competence.

But before President Mahama could pick his nomination forms, George Boateng, a former ally of former First Lady Nana Konadu Agyeman Rawlings, who is also a clearing agent with Aviance at the Kotoka International Airport and a youth organiser at one of the polling stations in Oyarifa, had stuck his neck out with regard to the presidential primaries of the party, thus calling into question the President's competence.

So far, he is the only one who has shown a face in the flagbearership race of the NDC, notwithstanding the initial setbacks he suffered before getting access to the nomination forms.

There were suggestions that the clearing agent was doing the dirty work for some influential members of the party who were not ready to go public.

He insisted he was not being pushed or manipulated by external political forces, although he conceded that he was a well-known associate of Nana Konadu Agyeman Rawlings.

The former First Lady challenged the late President John Atta Mills when he sought re-election as flagbearer in the 2011 Sunyani Congress of the NDC.

It was not clear if the clearing agent would get enough signatories to endorse the forms; but he told DAILY GUIDE last night that he got a banker's draft for GH¢51, 000 for the forms and filing fees at an SG Bank at Kokomlemle, from where he dashed to the NDC office to pick the forms.

Interestingly, he was seen wearing a brooch with President Mahama's picture on it when he went to pick the forms in a white apparel.

He stormed the party's plush headquarters located at Adabraka in Accra to pick up his nomination forms, where he gave reasons why President Mahama did not deserve another term in office.

Chief among the reasons he gave was the President's failure to improve the living conditions of Ghanaians, aside collapsing most of the social intervention programmes instituted by the previous administration including the National Health Insurance Scheme (NHIS) and School Feeding Programme (SFP) among others.

'The NDC administration is not doing well. The National Health Insurance Scheme has collapsed. Doctors are going on strike demanding high salaries. Petrol has been increased more than three times. Indeed Ghanaians are suffering.

“There are a lot of jobs ahead of the President that the President has never done,” George, a former member of the splinter group in the NDC, Friends of Nana Konadu Agyeman Rawlings (FONKAR), told journalists after picking the forms.

He stressed the belief that the poor state of social intervention programmes such as the National Health Insurance Scheme was an indictment on President Mahama, who is leading a social democratic party such as the NDC.

He called on the President to sack some Ministers who, according to him, were under-performing.

'He must sack all of them because they are not performing. Look at Afriyie Ankrah and what happened in Brazil and yet the President has not taken an action against them. I am calling for a change,' he said.

Wee
Surprisingly, George Boateng, who is seeking to become the flagbearer of the NDC, said if he unexpectedly pulled through, he would legalise marijuana (wee) and make it an export commodity to generate revenue for the nation.

'When I come to power, I will legalise wee for exportation. I will give license to export wee. When we talk about narcotics, there are laws covering them to the extent that we can export wee. It is when you abuse the law that you get punished for it. When you apply the law and obtain a license, you can export wee and that is not a crime,' he asserted.

Apart from that, the former FONKAR man said 'wee is a natural herb which we can cultivate for exportation because foreigners need wee, especially the people of Holland.'