By Nina Lamparski with Serene ASSIR in Belgrade 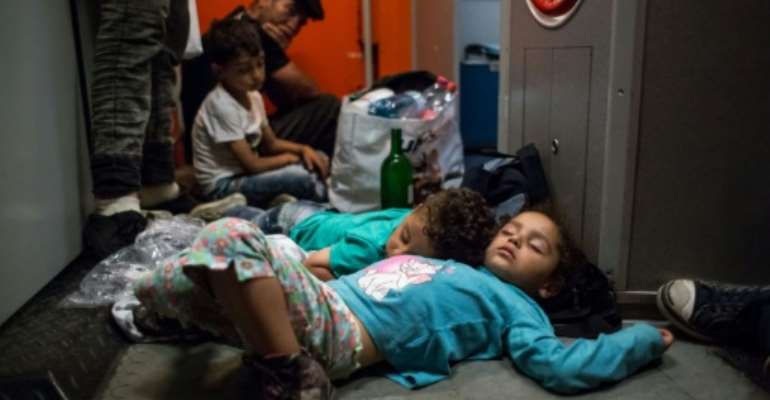 Migrant children sleep on the floor on the train from Budapest to Munich at the Austrian - Hungarian border in Hegyeshalom on August 31, 2015. By Vladimir Simicek (AFP)

Vienna (AFP) - Trains packed with migrants arrived in Austria's capital where 20,000 people turned out to show their support for the new arrivals, as Europe struggled to cope with the biggest movement of people since World War II.

Police looked on as hundreds of migrants -- many of them without visas -- pulled into Vienna's Westbahnhof station late in the evening before boarding trains to the Austrian city of Salzburg or on to Munich in southern Germany.

Authorities in Budapest have allowed the migrants, who had been stuck for days in makeshift refugee camps at the city's stations, to board trains for their ultimate destinations in northern Europe.

The trains were stopped at the Austrian border for several hours as part of a security crackdown after the decomposing bodies of 71 migrants, four of them children, were discovered in an abandoned lorry near the Hungarian border last week.

"I'm going to Germany!" cried one grinning migrant from Afghanistan standing by the doors of a packed train at Westbahnhof.

Europe is on the receiving end of the biggest movement of people since World War II, with more than 300,000 arriving this year, many fleeing war, persecution and poverty in the Middle East and Africa.

The escalating crisis has divided the 28-member bloc ahead of fresh emergency talks on September 14, with Western European leaders calling for more efforts to help the new arrivals while countries on its eastern borders say they are struggling to cope.

In a show of support for the migrants, 20,000 people took to the streets of Vienna on Monday evening to protest their ill-treatment, while senior government officials attended a church service for the victims of the truck tragedy.

Holding up large banners reading "Refugees welcome" and "I don't want Europe to be a mass grave", demonstrators rallied at the Westbahnhof train station before marching as they sang songs about love and solidarity.

Bystanders erupted into applause as the demonstrators, among them parents carrying children on their shoulders, headed down a major shopping thoroughfare watched by police officers with their helmets under their arms.

Not far away, a service was held at St. Stephen's Cathedral for the scores of migrants found dead in the van.

"We've had enough -- enough of the deaths, the suffering and the persecution," the archbishop of Vienna, Cardinal Christoph Schoenborn, told the congregation, which included senior government members.

Five suspected people smugglers, four Bulgarians and an Afghan, have been arrested in Hungary over the deaths of the migrants, all thought to be Syrian.

The deaths have also led to a security crackdown in Austria and massive tailbacks formed on the border with Hungary on Monday as officers inspected vehicles in search of people-smugglers and migrants.

More than 200 migrants have been picked up and five suspected people smugglers arrested since the checks started on Sunday.

Much-flouted EU rules stipulate that refugees should be processed in the first country they reach, but Hungary -- like Austria, a country of transit for migrants heading to northern Europe -- says it cannot host record numbers of newcomers.

An AFP correspondent at Budapest's main station described scenes of chaos as throngs of migrants surged forward to catch the last Munich-bound train via Vienna on Monday evening. Many had spent their day queueing for tickets to Austria and Germany.

"I can't believe I'm finally leaving Budapest, it's been very difficult," said Ephran, an 18-year-old Syrian, clutching a rucksack as he waited with his two brothers and mother.

Meanwhile, some 400 travel-weary migrants who had departed Hungary earlier in the day arrived by train in Bavaria, southern Germany, where they were taken to refugee centres in Rosenheim and Munich.

- 'Against the European spirit' -

Speaking two weeks before the latest round of talks on the crisis, German Chancellor Angela Merkel warned against damaging Europe's "close link with universal civil rights" in the handling of refugees.

Implicitly criticising countries like Slovakia that said they would reject migrants from majority Muslim countries, she said: "If we start saying 'I do not want Muslims' ... that cannot be good".

Her comments echoed those of French Prime Minister Manuel Valls in the French port of Calais, where he pledged to build a new reception camp for migrants in Calais by early 2016.

"Too many countries are refusing to play their part," he said. "It goes against the European spirit and we can't accept it."

Austria has called for EU funding for states refusing to take their share of migrants to be cut, and Polish Prime Minister Ewa Kopacz said her country could increase the number of refugees it had been willing to accept.

Most of the migrants land in Italy or Greece, then make for the wealthier countries of northern Europe, transiting through countries in eastern Europe and the Balkans, like Macedonia, Serbia and Hungary.

Hungary, which has seen 50,000 new arrivals this month, has built a razor wire fence along its border with Serbia to try to keep migrants out, and is planning four-metre (13 feet) fence to be policed by border guards and sniffer dogs.

European Council President Donald Tusk said the EU needed "a way between the chaotic mess symbolised by the dramas in Calais... or the tragedies in the sea or recently in Austria, and drastic actions like those taken by Hungary".