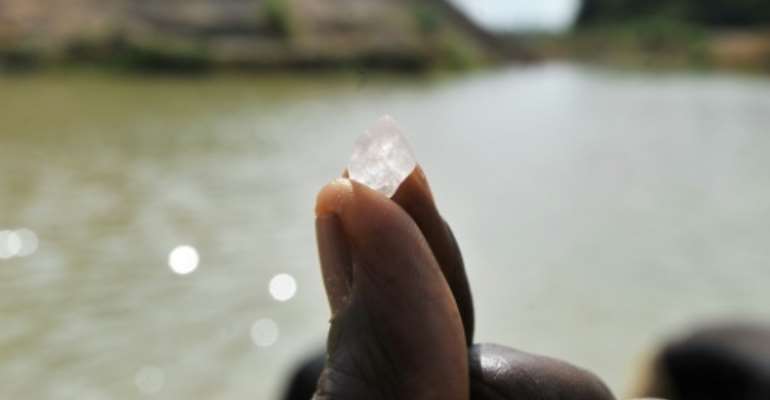 A diamond prospector holds up a diamond stone on April 28, 2012, in Koidu, the capital of the diamond-rich Kono district, in eastern Sierra Leone, on April 28, 2012. By Issouf Sanogo (AFP/File)

Police on Friday detained Michel Desaedeleer, 64, at Malaga airport in southern Spain under a European arrest warrant issued by the Belgian authorities.

He was just about to board a flight to the United States when he was arrested.

Desaedeleer, who has both Belgian and US citizenship, has agreed to be handed over to the Belgian authorities, a spokesman for Spain's National Court said.

Belgium sought his arrest following a complaint filed in Brussels in 2011 by five former diamond mine slaves.

They detailed alleged crimes in Sierra Leone's eastern district of Kono between 1999 and 2001.

The conflict was partly funded by trade in illicit gems known as blood diamonds, as fighters forced civilians to mine them.

Former Liberian president Charles Taylor received a 50-year jail sentence in May 2012 for supporting the Revolutionary United Front rebels in neighbouring Sierra Leone during the civil war in exchange for the diamonds.

The rebels were notorious for hacking off the hands and legs of civilians during the war.

"This is the very first time that a businessman has been arrested for his alleged involvement in the international crimes of both pillage of blood diamonds and enslavement of civilians," said Civitas Maxima, a Geneva-based organisation that gives legal advice to victims of war crimes and has helped build a case against Desaedeleer.

The group said Desaedeleer is suspected of having participated with Taylor and the Revolutionary United Front "in enslavement as a crime against humanity and pillage of 'blood diamonds' as a war crime in the district of Kono".

"Blood diamonds" or "war diamonds", which account for four percent of total global production according to Amnesty International, helped finance civil wars across Africa in the 1990s and are often used to prop up military dictatorships in the continent.

Desaedeleer's name was mentioned in a United Nations report in 2000.

It said he signed an agreement in 1999 with the Revolutionary United Front allowing him to exploit diamond mines in Sierra Leone and ship the gems abroad via Monrovia, the capital of Liberia, to be sold mainly in Antwerp, Belgium's most populous city and the heart of the global diamond trade for several centuries.

Desaedeleer has previously denied any wrongdoing, telling Newsweek magazine in 2000 that he had a legitimate contract for exclusive mining and development of diamonds in areas of Sierra Leone controlled by the Revolutionary United Front and saying all his actions were above board.

"This is a landmark case, the first of its kind, and it will help to raise awareness of the pivotal role played by financial actors in the trade of mineral resources that fuel armed conflcits in Africa and elsewhere," said Civitas Maxima director Alain Werner.

Sierra Leone's government has attempted to crack down on cross-border diamond trafficking to persuade foreign investors that blood diamonds are a thing of the past.

The trade was dramatised in the 2006 movie "Blood Diamond" starring Leonardo DiCaprio, based on a non-fiction book by US journalist Greg Campbell which mentions Desaedeleer.