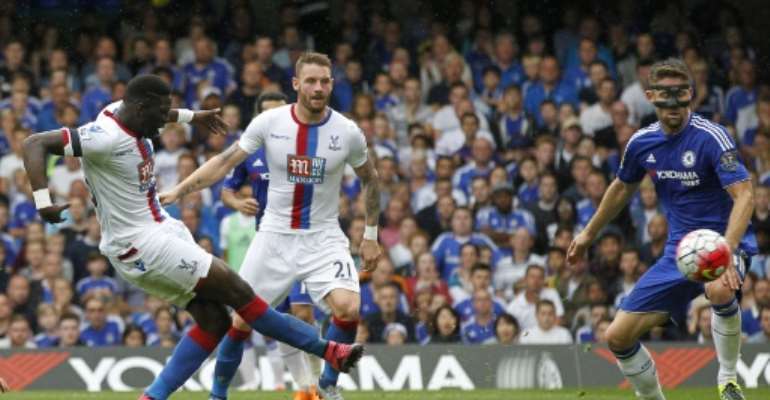 Paris (AFP) - A hat-trick of African goals contributed to the dramatic English Premier League defeats of giants Chelsea, Manchester United and Liverpool at the weekend.

Ghanaian Andre Ayew continued his fairy-tale start at Swansea by equalising, then creating the winner in a 2-1 come-from-behind home triumph over United.

Malian Bakary Sako was involved in both goals as Crystal Palace shocked Chelsea 2-1 at Stamford Bridge, scoring the first and creating the second.

Ghana midfielder Ayew was his team's inspiration as Swansea came from behind to defeat previously unbeaten Manchester United 2-1 at a raucous Liberty Stadium. The former Marseille player, son of Ghana legend Abedi Pele, equalised with a well-taken 61st-minute header -- his third goal of the campaign -- before creating the winner for Bafetimbi Gomis five minutes later with a glorious pass from the right-hand touchline.

Following a winning goal against Aston Villa on his debut, Mali forward Sako scored one goal and made another as Crystal Palace claimed a first win at Chelsea since 1982. Sako swept a cross from Congolese Yannick Bolasie past Chelsea goalkeeper Thibaut Courtois in the 65th minute and then set up Joel Ward for a headed winner after Radamel Falcao had equalised for the champions.

Senegal striker Sakho ended a difficult week with a goal as West Ham won 3-0 at Liverpool. Arrested earlier in the week on suspicion of making threats to kill and witness intimidation following an earlier arrest on suspicion of assault, Sakho struck in injury time at Anfield to seal West Ham's first away win over Liverpool in 52 years.

Linked to Manchester United in recent weeks, Mane set up the first two goals as Southampton beat Norwich City 3-0 to claim their first win of the campaign. The Senegalese winger set up Graziano Pelle in first-half stoppage time and then teed up Dusan Tadic in the 64th minute, with both goals first-time finishes from low, right-wing crosses.

Democratic Republic of Congo forward Bakambu came off the bench to score his first two goals for Villarreal with two calm finishes from close range to hand the Yellow Submarine their first victory of the season in a 3-1 success over Espanyol.

Moroccan forward El Arabi converted from the penalty spot before Nigerian Success slotted home a second for Granada as they picked up their first points of the season in a 2-1 win at Getafe.

Cameroonian goalkeeper Kameni made a hat-trick of fine saves from Lionel Messi, but his performance couldn't salvage a point for Malaga at the Camp Nou as Barcelona edged a nervy 1-0 win.

Salah produced one of his most useful performances in Serie A, the Egyptian's pace, vision and sheer physical presence giving Roma plenty of options and Juve plenty of problems as the Giallorossi claimed a 2-1 win over the Italian champions at the Stadio Olimpico. He created space, allowing Roma to maintain a high-intensity, attacking game.

Togolese international Gakpe has taken only two games to score his maiden goal for Genoa, and it seems to be down to him playing a more central role in Gian Pietro Gasperini's attack. Gakpe, who was brilliant throughout, put the match beyond the reach of visiting Verona with a well-taken goal 15 minutes from the end for a 2-0 win.

Moroccan midfielder Boufal was described as "talented" and "effective" by his Lille coach Herve Renard after scoring the winning goal in a 1-0 success against Gazelec-Ajaccio. Boufal, Lille's playmaker, ran onto a pass from Djibril Sidibe to dink home a clever finish on 23 minutes.

The Ivory Coast forward was in the right place at the right time to add gloss to Rennes' victory over Toulouse with a last-minute goal in a 3-1 victory. Sio tapped home from close range after fine work from Paul-Georges Ntep on the left wing as Rennes moved up to third.

The Tunisia attacking midfielder scored the crucial first goal as Bordeaux earned their first win of the season against Nantes 2-0. Khazri combined well with Enzo Crivelli to slot home in first-half time added on. That went some way to saving the Franco-Tunisian's blushes after he saw his terrible attempt at a 'Panenka' penalty easily saved by goalkeeper Remy Riou.

The Gabon striker scored his seventh goal in eight games in all competitions this season as Borussia Dortmund reclaimed top spot in the Bundesliga with a 3-1 win over Hertha Berlin. He enjoyed a simple tap-in on 51 minutes when right-back Matthias Ginter and Japan's Shinji Kagawa combined to set him up.

The Ivory Coast veteran claimed his second goal in three league games by netting Hertha's consolation in their 3-1 defeat to Dortmund. Kalou became the first player to score against Dortmund in the league this season when he stabbed home on 78 minutes before Adrian Ramos scored the hosts' third just before the final whistle.