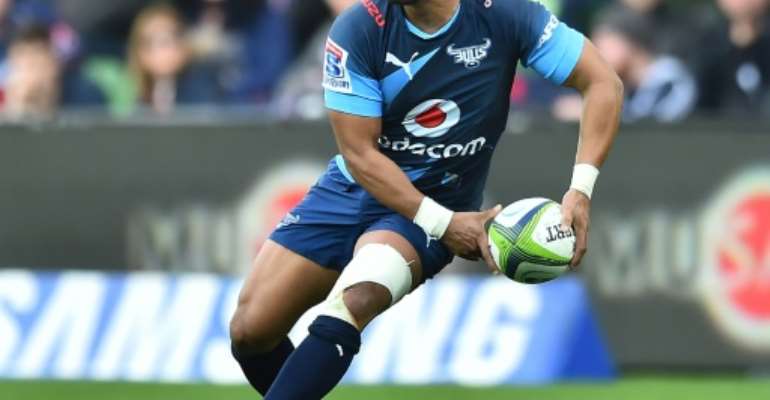 Rudy Paige is included in the 2015 South Africa Rugby World Cup squad despite being ignored during four warm-up matches. By Theo Karanikos (AFP/File)

The 26-year-old Northern Bull and 30 other players were named by coach Heyneke Meyer in the Indian Ocean city of Durban for the global rugby showpiece from September 18 to October 31 in England.

Paige is one of a record nine black players selected after the racial composition of the predominantly white Springboks recently became an emotive public and media issue.

But black prop Trevor Nyakane defended the selection policy of Meyer, adding that he doubted whether any of the preliminary World Cup squad had gone to the trade union.

"Cutting the squad to 31 was probably the most difficult selection I have faced in my coaching career," Meyer said after the announcement.

"We had to give consideration to utility players such as Schalk Brits and Pieter-Steph du Toit, both of whom can play in the back row.

"Coenie Oosthuizen can pack down on both sides of the front row.

"A number of our backs, such as JP, Ruan, Patrick, Handre, Damian, Jesse, Lwazi and Zane are comfortable playing in more than one position.

"I think the squad has a great balance between youth and experience, keeping together the core of the team that did the country proud in the last few years.

"We also have a number of players who know what it takes to win a World Cup and their knowledge will be invaluable.

"We are going to England with the hopes of the nation on our shoulders and we would truly like the to make our nation proud, but are under no illusions about how tough it will be."

The inclusion of Paige comes after he watched from the stands as the Springboks played Argentina twice, Australia and world champions New Zealand during July and August, losing three of the four Tests.

Pienaar from Irish province Ulster started each match and Reinach was used off the bench, only to be dropped for the World Cup.

Du Preez, among nine survivors of the 2007 World Cup-winning squad, got the nod in a remarkable show of faith by Meyer given the half-back last played in February this year.

Skipper and inside centre Jean de Villiers and No. 8 Duane Vermeulen are other players who have had fitness issues and will be on the plane to England.

De Villiers completed a miraculous recovery from a knee injury only to break his jaw on his Test comeback in a humiliating home defeat by Argentina.

Vermeulen, a powerful ball-carrier who epitomises the physicality of the Springbok pack, underwent neck surgery after a mid-year injury failed to heal.

Meyer said every player in the squad is expected to be fit for the opening match against Japan on September 19. Samoa, Scotland and the United States are the other Pool C countries.

Du Preez and De Villiers partly owe their places to a coach who emphasises experience, believing it to be a prerequisite for World Cup glory.

"You need experienced players because they have been to the World Cup and have dealt with pressure," stressed Meyer recently.

"When players are under pressure, some can do things that make you wonder whether they have ever been coached."

True to his word, Meyer has saturated the squad with experience.

Lock Victor Matfield -- the old man at 38 -- and loose forward Schalk Burger will be going to the World Cup for the fourth time.

And for many others it will be a third appearance at a quadrennial tournament dominated by the three southern hemisphere giants.

Australia, New Zealand and South Africa have each lifted the trophy twice, with the 2003 success of England in Sydney the lone northern hemisphere triumph.

Ghana Back To HIPC Not True – Oppong Nkrumah
13 minutes ago

Allowance For Workers Who Lost Job Due To Covid-19 — Mahama ...
25 minutes ago