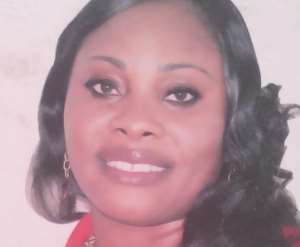 Shirley Naana Osei-Ampeh, the coordinator for 'Youth For Mahama,' a group of National Democratic Congress (NDC) supporters promoting the presidential ambition of John Mahama, on Thursday picked and filled the parliamentary nomination forms on the same day.

The party has opened nominations for its members who want to contest in the parliamentary primaries slated for November 7, 2015, to pick their forms.

Shirley, former women's organiser of the NDC in the Lower West Akim constituency of the Eastern Region, was accompanied by a good number of the constituency executives to the party office to pick her forms, which she took home to fill and returned to the office to submit them.

The Lower West Akim parliamentary seat is currently being occupied by a member of the opposition New Patriotic Party (NPP). Three months ago, the incumbent, Gifty Klenam, was ousted by Gyan Baffour during the party's (NPP's) parliamentary primaries, after annexing the seat for eight years.

Shirley Naana Osei-Ampeh is said to be the first female to aspire for the parliamentary seat on the ticket of the NDC in the constituency.

Addressing a press confab after filing her forms, she noted, “There always comes a time in one’s life when great and tough decisions need to be taken therefore, I have decided to contest in the upcoming NDC parliamentary primaries for the 2016 general elections.”

Signals picked by the paper indicate that some of the constituency chairmen have been trying to prevent the issuance of the nomination forms to some of the aspiring candidates who are intending to challenge the NDC incumbent MPs in areas like Akwatia, Lower Many Krobo, Adeiso and Upper Manya Krobo.