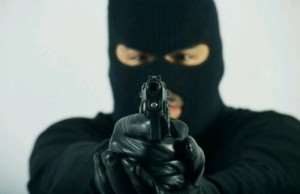 Information available to DAILY GUIDE indicates that some armed men on Wednesday robbed the Central Regional offices of the Driver and Vehicle Licensing Authority (DVLA) after over-powering the only security man on duty.

The incident reportedly happened around 1:00 am when they threatened to kill the security man on duty.

The suspected robbers allegedly ransacked all the seven offices and scattered documents on the floor.

Information had it that the robbers, numbering about seven, made away with GH¢3,000 which was in the office of the regional accountant.

The robbers allegedly could not break into the safe located in the regional manager's office.

Briefing the media, the Regional Manager of the Authority, Emmanuel Klugah, hinted that the robbers tied the security man before gaining access into offices.

He said it took the intervention of another security officer from a nearby company to untie the man before a police patrol team arrived at the scene.

Mr Klugah added that the security man was admitted at the Central Regional Hospital due to some serious injuries he sustained.

The regional director revealed that his outfit had made a formal complaint to the police and was assisting with investigations.