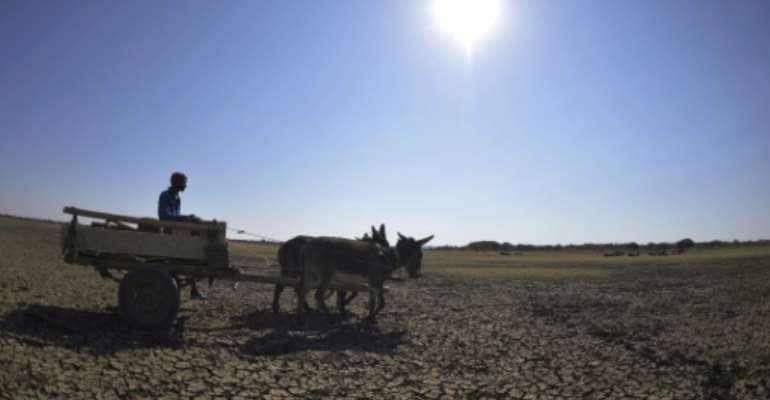 From power plants in Botswana to diamond mines in Zimbabwe Africa has counted on China for investment. By Monirul Bhuiyan (AFP/File)

Johannesburg (AFP) - When Chinese company Shanghai Zendai bought 1,600 hectares (4,000 acres) of land outside Johannesburg in 2013, it promised to build the "New York of Africa."

The sleepy district of Modderfontein would be transformed into a $7.8 billion metropolis with a forest of skyscrapers, 35,000 houses and a sanctuary of green space to rival Central Park.

The planned city became a symbol of China's seemingly limitless ambition across the African continent.

But as global alarm bells ring over China's slowing economic growth, future projects on the vast scale of Modderfontein could be under threat.

"It's like we had a big party and the hangover is going to continue a bit longer than we anticipated," Dennis Dykes, head economist at South Africa's Nedbank, told AFP.

"It was unrealistic to believe that China would continue operating at the level it was."

For the past decade, China gobbled up much of the commodities that Africa produces, overtaking the United States in 2009 to became the continent's single largest trading parter.

From power plants in Botswana to diamond mines in Zimbabwe -- and a spate of shiny sports stadiums -- Africa counted on China for investment, infrastructure and jobs.

Beijing even built the $200 million African Union headquarters in the Ethiopian capital Addis Ababa in 2012 as a gift expressing "friendship to the African people."

Chinese companies are involved in hydropower projects in Zambia, Gabon and the Democratic Republic of Congo.

China has also funded coal power stations, roads and schools in Botswana, mines in Namibia, and in Malawi it provided funds for a new parliament, a university, hotels and conference centres.

However, the rapid pace of investment could be at risk as China grapples with weak demand for its goods and a schizophrenic stock market.

Many experts now question the sturdiness of China's growth and warn of the inevitable damage to those countries who rely on it.

"The first impact is on commodity prices, which directly influences Africa. The second is investment, which will obviously slow down," said Celeste Fauconnier, Africa analyst at Rand Merchant Bank. "We should be concerned."

Already, countries are reeling from the Chinese turmoil, with commodity prices falling to a 16-year low, according to the Bloomberg Commodity Index tracking 22 raw materials.

Bureaucrats have had their pay delayed in Nigeria after the price of oil collapsed to less than $50 a barrel and depleted state coffers.

"We are worried because China is one of the major consumers," said Fredson Yamba, a treasury official in Zambia, which derives almost 70 percent of its export earnings from copper.

The China slowdown has exacerbated problems in African countries that depended on high commodity prices to balance their books, with South Africa particularly hard hit.

"It has impacts on our current account balance, it has implications on our trade balance," said Hugo Pienaar, economist at the University of Stellenbosch Bureau for Economic Research.

To keep growing, African economies have to wean themselves off commodities, analysts say.

"Most sub-Saharan African countries have been drunk on China's growth. The thing they should have been doing 15 years ago is to rapidly diversify their economies and not rely on commodities," said Davis.

"It's never too late, but the pressures now are intense."

Despite the worries, economists say predictions that China will no longer be a major player in Africa are overblown.

"The general trend of China as infrastructure partner is not going away."

Instead, China's activities in Africa are set for a wholesale review to take into account the new global economic outlook.

"We're in a much lower commodity price regime for the next couple of years," said Dykes. "I must admit, this has a horrible structural feel to it at the moment."