S.Sudan army ordered to end fighting ahead of ceasefire 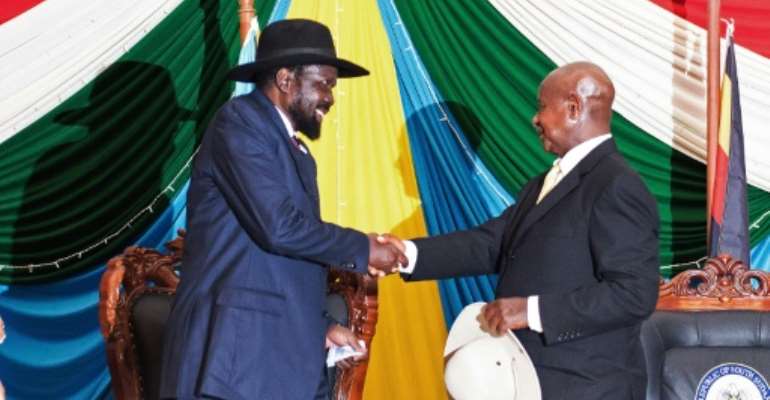 Juba (AFP) - South Sudanese President Salva Kiir has ordered all government troops to cease fighting rebel forces as part of a peace agreement, his spokesman said, ahead of a full ceasefire on Saturday.

Kiir has ordered all the army "to stop shooting and remain in their barracks where they are, but they can shoot in self defence once attacked," spokesman Ateny Wek Ateny told AFP on Friday.

Both sides accused each other of launching attacks on Wednesday as Kiir signed a peace deal aimed at ending the 20-month long civil war in which tens of thousands of people have been slaughtered.

The accord, already signed by rebel chief Riek Machar, gave a 72-hour deadline for a permanent ceasefire, with comes into effect around sunset on Saturday.

Late on Thursday, rebels accused the army of attacking their positions in the northern battleground state of Unity. The army did not respond, but has previously dismissed rebel claims as lies, or accused them of launching attacks.

Facing the threat of international sanctions, Kiir signed the deal but annexed a list of reservations that he said would have to be addressed for the deal to take hold in the world's newest nation.

Machar has said the reservations "casts doubts" on the government's commitment.

The UN Security Council has given Kiir until September 1 to get fully behind the agreement or face possible sanctions, and the United States has circulated a draft resolution that would impose an arms embargo and targeted sanctions on those who undermine peace efforts.

Two powerful rebel generals, Peter Gadet and Gathoth Gatkuoth, split from Machar earlier this month, accusing him of seeking power for himself.

The government has said the split is a key reason they doubt the peace deal can be effective. Ateny said rebels must also stop fighting.

"We expect also Riek Machar to do the same with his forces," Ateny said, but added that as rebels were "no longer one entity", it "remains to be seen how Machar will control his forces."

The signed deal gives the rebels the post of first vice president, which means that Machar would likely return to the job he was sacked from in July 2013, an event which put the country on the path to war later that year.

But the 12-page government list of reservations of the peace deal calls this a "humiliation" and a "reward for rebellion", and insists the post of first vice-president must be on equal footing with the current vice-president, whose post remains.

Fighting erupted in December 2013 when Kiir accused Machar of planning a coup, unleashing a wave of killings that split the country along ethnic lines. At least seven ceasefires have already been agreed and then shattered within days or even hours.

Over two million people have fled their homes from a war marked by ethnic killings, gang rapes and child soldier recruitment. Some 200,000 terrified civilians are sheltering inside UN bases.

Under the peace deal, a "transitional government of national unity" will take office within three months.