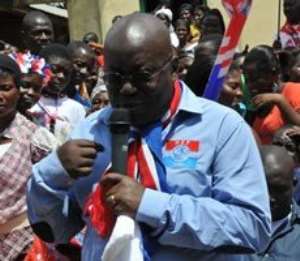 Presidential candidate of the New Patriotic Party (NPP) Nana Addo Dankwa Akuffo-Addo says the party’s call for the creation of a new voters’ register is not to yield electoral gains for it.

In a statement copied to Joy News, Nana Addo said the purpose of the call for a change in the electoral roll is to fortify the country’s democracy.

“We are calling for a new voters’ register not because we think we it will present the NPP with any electoral advantage. We are doing so because we want to strengthen and deepen Ghana’s democratic credentials.

“We want a democracy where Ghanaians, not foreigners, can rightfully and confidently determine who their leaders should be, and also where the major stakeholders have no qualms, whatsoever, about the outcome of elections.”

Nana Akuffo-Addo said this when the newly elected NPP parliamentary candidate for the Tema West constituency, Carlos Kingsley Ahenkorah, called on him at his Nima residence formally to introduce himself to him after his victory in the July 25 parliamentary primary.

Addressing the entourage, consisting of polling station and constituency executives from Tema West, the presidential candidate stated that “we want a credible electoral system in Ghana, and not just a new voters’ register. That is what we are fighting for, because it is the best guarantee for our future stability and progress.

The NPP flagbearer recounted how, since 1992, the NPP has been the only party that has been the lead instigator of electoral reforms in Ghana.

The introduction of transparent ballot boxes, photo voters’ ID card, and a biometric voter register in 2012, he said, have all been at the behest of the NPP.

The NDC, on the contrary, have always been opposed to any form of electoral reforms.

“I remember when the NPP proposed a photo voters’ ID card to replace the thumbprint ID card, the then Attorney General, my good friend and senior, Dr. Obed Asamoah, opposed it. When the NPP proposed a biometric registration, the EC, at the time, described the proposal as unheard off. Because of our advocacy and the benefits of these reforms to the stability of Ghana, these were widely accepted by all at the end of the day,” Akufo-Addo noted.

To the polling station and constituency executives who accompanied Carlos Ahenkorah, the NPP presidential candidate admonished them to fully support him in the party’s quest to retain the seat in 2016.

He urged them to desist from airing out whatever issues they may have with Carlos Ahenkorah on the media landscape.

“Every family has issues, but these issues are always settled at home. If he is doing something to your displeasure, please go to him in private and address these issues. There is no need to go the radio or newspapers to address your issues. We want to bring to an end all the loud talk in the NPP to a closure, so we can foster a sense of unity in our party,” he added

Nana Akufo-Addo also urged Carlos Ahenkorah to tap into the wealth of experience of current NPP MP for Tema West, Hon. Irene Naa Torshie Addo, in the run up to 2016.

By extending a hand of co-operation to Hon. Naa Torshie Addo and her supporters, Nana Akufo-Addo indicated that this will be the first step towards fostering unity in the constituency, and, thus, guaranteeing hard work by all NPP members in retaining the seat for the NPP.

Carlos Ahenkorah thanked Nana Akufo-Addo for meeting the delegation, and went on to assure Nana Akuffo-Addo that he will rest at nothing to make sure that the Tema West seat, which has traditionally been an NPP seat, remains an NPP seat, with an increment in the winning margin in the 2016 elections.

“Not only will Tema West remain in the hands of the NPP, but I can also assure you that your winning margin will see a massive increment in 2016,” he added.