The Thing With Africa – Part One 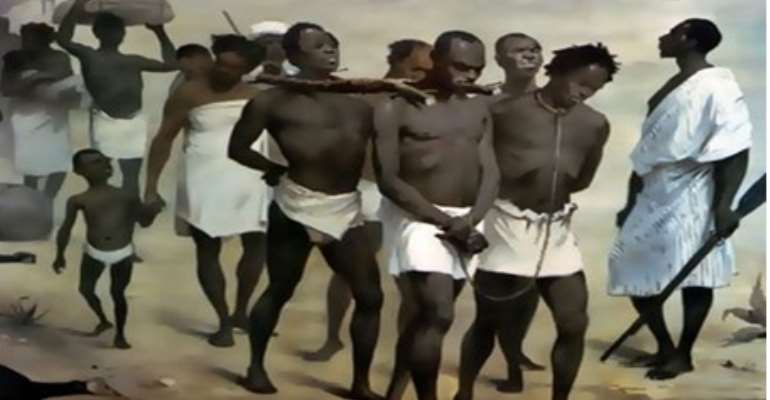 My parents made sure that as growing children we travelled to our hometown often to spend our holidays. For this reason we were partly groomed by our grandmother, though we lived in the city centre. Initially it was fun but later it became hard work and much later farm work. The farming side was with much excitement at first but later it became boring. The result was each time we were to travel we felt a mixture of anxiety and distaste. Our parents did not notice that part since taking orders was part of our family culture.

It was during one of those holidays that our grandmother “Nne” told us a pathetic story of an aged woman we noticed dancing conspicuously in a relative’s burial ceremony. Her name is Mgbobu “Nne” said.She was one of the people sold into slavery many years ago; “Mgbeezi di n’ukwuukwa”. According to her, the unfortunate woman was sold as slave at her prime by her very own father. She was resold to a second slave master who in turn sold her to the third, then fourth, fifth and finally sixth.Eventually, her sixth and last master rejected her after housing her for two market weeks for her ugly look. He tried to resale her to no avail. He returned her accordingly to the previous masters and then her father who refunded the evil money he collected on her head.

Nnetold us that so many young people from our village were sold as slaves and taken to the end of the world and never returned. Few years after, while in high school, I understood my grandmother’s story to mean the trans-Atlantic slave trade which was willfully organised by a few white business men and the various national governments of Western Europe with the help of the community leaders as it were in the whole of Africa.

Africa is a choice continent with a substantial part of the world’s total deposit in metals and other natural resources. It lies on a land mass of approximately 30.2 million km2 with estimated population of about 1.1 billion people. Africa is not just the second largest Continent on account of sizeand population; it has the huge advantage of having well over 50% of her population below 19 years.

Why this magnificent advantage Africa holds does not translated to the well being of her citizens is indeed shocking.

Furthermore, it appears her critics still believe she is cursed. Probably because there is no known reason for a continent with such enormous potential to perpetually be in debt, and mysteriously behind time in every facet of development. However, for Countee Cullen (1903 - 46) an African - American poet, Africa is a copper sun or scarlet sea, jungle star or jungle track. Strong bronzed men or regal black women from whom he sprang when the birds of Eden sang.

It is imperative to also understand that though Africa has played major role in the rebuilding of the modern world, she has lost touch with herself and is unable to amend her battered foundation. Through the ages she has over relied on her competitors for almost every aspect of development. It is either she gets others to make her a simple match or a bicycle or a cooling system or she needs their assistance to stop malaria.The thing with Africa is she abdicates her responsibilities placing them in the hands of other nations. The result is the present consistently manipulated and overused continent we live in.

Abraham Lincoln (1809 - 65) in a speech and an attempt to encourage his countrymen on the act of nation building observed.

“America can never be destroyed
fromthe outside, if we falter
and looseour freedom, it is
because we destroyed ourselves.”
Africa would never have been brought to her knees only by the efforts of invaders, but mostly with the willful collaboration of those entrusted with the position of leadership within her territory. Come to think of it, whether an unreasonable sale of her youngest and brightest as in the slave trade era or a blind and visionless leadership in the post independent Africa, all culminating in outright gross mismanagement of her nature given resources. It is obvious that for sheer want of immediate gain by her leaders, Africa has so much lost her freedom that even her independence could not salvage the already manipulated economic tie built around capitalism and the directed by developed countries of Western Europe and North America

.This is not in any way an attempt to discredit anyone, the very positive contributions of the founding fathers of modern Africa, but to dispel the saturating rumour that Africa is cursedafter the curse of the third son of Noah (Gen. 9:24&25). And Noah awoke from his wine and knew what his younger son hard done unto him and he said,“Cursed be Ham, a servant of servants shall he be unto his brethren.” Tt is rather to insist that Africa deserves more, having been short – changed greatly in the present global arrangement. She has received much less from her great contribution to the rebuilding of the modern world.

If you ask me, the future of Africa is no more in the hands of self imposed men, who gain power through manipulative tendencies wearing the right colours of democracy, leaders that lack understanding of the present globalcompetition subtly disguised as coalition.

It is rather in the regenerated hearts and loving hands of her brightest and best scattered both at home and abroad, who are willing to pay the price of true leadership. Our future is in the streets where we must hold our leaders accountable and mould them to be responsible. Africa has people.

The “people” have never lost, never. The events which are now unfolding, having the symptoms of such that led to the famous French Revolution, Americans struggle for freedom and the recent Jakarta experience is steering us in the face.The “people” of African must rise again to muscle their freedom from the present recycled and dishonest leaders, assert themselves positively in our world and step in the right pedestal to take her place among the committee of nations.

President Akufo-Addo Finally Reveals What He Does In Self-Qu...
2 hours ago