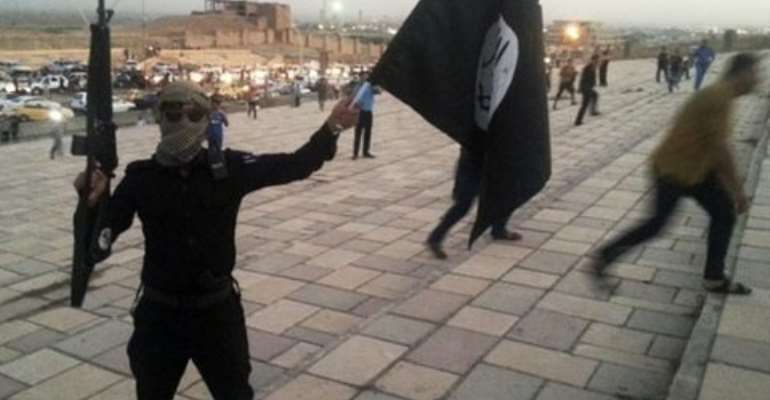 A Ghanaian female Shakira Mohammed is also reported to have joined terrorist organization, Islamic State (IS).

Refusing to go beyond this scanty detail about the female ISIS disciple as their investigations gather momentum, National Security managers yesterday told selected editors in a maiden engagement since the ISIS story broke out, to be circumspect in their reportage on the subject.

Daily Guide has gathered from other sources however, that the lady in question hails from the northern part of the country and was until her departure domiciled in Tema.

National Security Coordinator, Yaw Donkor, assured the nation that although the number of those joining the ranks of the dreaded terrorist organization could rise, "there is no reason to fear. The ISIS recruitment could go up instead of coming down but currently the number of those who have joined them is only a handful".

He added that social media are the main means of reaching out to those subscribing to the ISIS mentality.

Another reason why there should not be excessive fear about ISIS threat in the country is that, "the current direction is out­ward. It is only when they are returning that we should worry."

He confirmed that 25-year-old graduate of the Kwame Nkrumah University of Science and Technology (KNUST), Nazir Nortei Alema and another man called Rafik have joined the terrorist group.

Sources of Recruitment
Public tertiary institutions have so far been sources of recruitment for ISIS, Daily Guide has gathered the national security apparatus has directed its attention to these locations in its continuing investigations.

Mr Yaw Donkor, exuding a reassuring confidence as he was supported by the National Security Advisor, Baba Kamara, cautioned the media and Ghanaians in general against stereotyping when dealing with the ISIS issue because "we are all potential recruits."

The issue, he urged, should not be limited to the Islamic community because it goes beyond that, adding that even before matters got to this stage the National Security Council had under­taken outreach programmes to alert people about the security threats posed by religious zealots.

While pointing at the negative role of the social media in the matter under review, the National Security Coordinator explained that not all members of such groups share extremist views.

ISIS recruits use coun­tries such as Burkina Faso or Niger for their onward journey to their final destination of either Syria or Turkey.

Yaw Donkor disclosed that there is a school in Niger where ISIS recruits undergo preliminary train­ing before departure to their final destinations.

Badhan Diallo, the Guinean alleged to be the brain behind the recruitment of Ghanaian ISIS disciples for instance, did not spot any changes in his demeanour, Mr Donkor said.

Some, he went on, show changes such as with­drawing into themselves, growing beard and spotting turbans.

"Close associates can pick up unusual traits and tell Imams or pastors," he entreated.

A number of challenges bedevil national security operations regarding the subject under review, he said, as he pointed at the non-existence of a relevant law to deal with it.

ISIS disciples become potential terrorists only when they leave the coun­try, explaining that when such persons are here little or nothing is known about them until they depart. Under such circumstances he asked, "What do we do?"

The challenges not withstanding, Mr Yaw Donkor and the National Security Advisor (Baba Kamara) posted sufficient and convincing knowledge about the subject and their being on top of it.

Baba Kamara
Baba Kamara said the details as contained in the Daily Guide, are already known to the National Security Council, adding circumspection and discre­tion should be applied when reporting on subjects with national and interna­tional security implications.

Ghanaians who have so far joined ISIS are Nazir Nortei Alema, Abubakar Mohammed, Shakira Mohammed. Meanwhile, the real nationality of Bedhan Dial­lo is not known. Although he is said to have attended secondary school and uni­versity in Ghana, some reports claim he is a Guinean.

It took the report on the departure of Nazir Nortei Alema for the lid to be removed over the ISIS recruitment drive in Ghana.