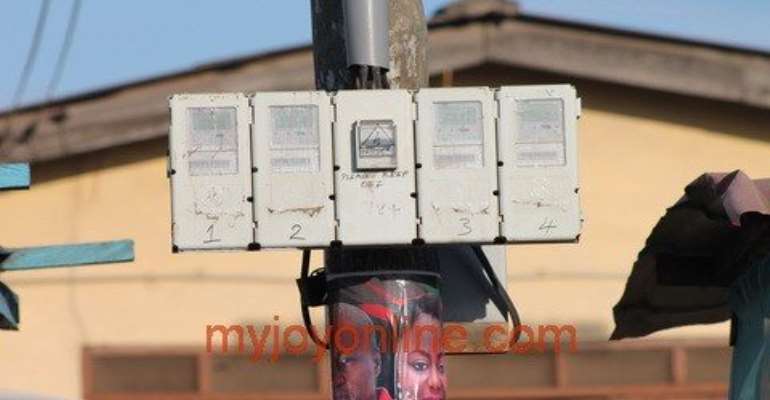 Electricity consumers on the prepaid metering platform are being served with bills by the Electricity Company of Ghana (ECG) officials demanding full payment for alleged arrears as result of technical failure some existing prepaid meters.

The decision by management of ECG to further bill prepaid consumers for power they have already paid for had come as a shock to the customers and raised suspicions of extortion.

Consumers in the Roman Ridge District, for instance, were stunned to receive huge bills from officials of the electricity distributor and asked to pay all debts before power is restored to their homes.

"We buy electricity credits consistently every month. However, my old prepaid meter was just changed to the new one. When I went to buy credits onto the new meter, I was told my meter has been blocked because of an outstanding debt of È»255.48.

“How can a prepaid meter user be indebted to ECG?" Comfort Ama Tsibu , a 60-year-old retired child care giver told the B&FT.

William Boateng, who is in charge of Public Relations of the ECG told the B&FT that the development could be attributed to the failure of the meter to trip when the consumer's credit runs out.

ECG in a letter addressed to the affected residents admitted the problem was with the meters rather than consumers but still required consumers to bear the full costs of the failure of the meters.

"You will recall that the prepayment meter installed in your premises became faulty and was replaced/repaired recently.

"The problem was traced to the electronic component, which failed to trip. The mechanical counter, however, recorded all the units that you have consumed since the meter was installed.

"We regret any inconvenience caused by the failure of the meter to trip and hope for an early settlement of the amount. Payment within fourteen days would be highly appreciated," the electricity distributor said in a letter addressed to one consumer.

Other consumers of the district also had similar stories about ECG's letter requesting them to make full payment for technical failure.

The Public Utilities Regulatory Commission, however, has stepped in to calm matters by requiring the ECG to better engage consumers and stagger the payment of any debt so consumers can pay over an agreed period.

When this was brought to the notice of the Commission by the B&FT, Nana Yaa Akyempim Jantuah, Director, Public Relations & External Affairs dispatched two officials to the affected area to investigate the issue and seek a solution to the problem.

In a meeting with the District Manager, Ibrahim Yakubu, he agreed to stagger the payment for the affected residents on a case by case basis.

The development is a symptom of a bigger problem with the existing prepaid metering system, as complaints have also been received from residents of Adenta , and Spintex in Accra.

Indeed, challenges with ECG's operations over decades, have left government with no option than to turn to private investors to run the state-owned electricity distributor on a concession arrangement for a possible 20-25 years.

Cabinet has approved the model and government will soon choose a transaction adviser for the details and modalities in deciding on a concessionaire that will be required to, among other things, invest in the ECG.

The Millennium Challenge Corporation is overseeing the execution of a $498million Ghana Power Compact.

A chunk of the money in the five-year compact is to be invested in improving the "governance and management" of the ECG, by bringing in a private sector operator to help reduce losses and improve service quality.

"The ECG will be put on tender and a Concessionaire will be selected to operate and manage it for a number of years," CEO of the Millennium Challenge Authority, Owura Kwaku Sarfo , said in an earlier interview.

According to the Millennium Challenge Corporation, the compact could facilitate the injection of at least $4.6billion in private energy investment and activity from American firms over the coming years.

Already, America's General Electric (GE) has been working to roll out l,000 megawatt power project in the country valued at over $l billion.

Government of Ghana has also pledged to invest at least $37.4 million of its own money as counterpart funding.