Liberia union warns of rise in police attacks on journalists 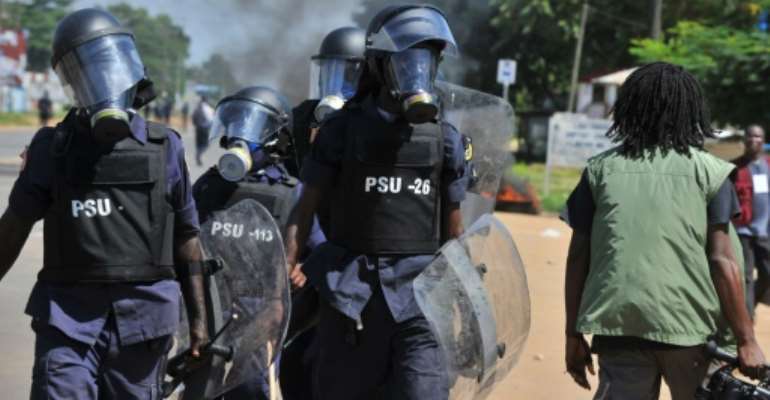 Liberian police walk in street in Monrovia on November 7, 2011. By Issouf Sanogo (AFP/File)

Monrovia (AFP) - Liberia's press union on Thursday called on police to stop "whipping" journalists, condemning a rise in violence against members of the media in the west African country.

A week ago, a male and female journalist were beaten by state security forces with batons while covering a demonstration by teachers outside the office of the president, an AFP journalist witnessed.

"Journalist are not whipping dogs, this increasing violence against journalists is a calculated plan to intimidate and harass the independent media," said the Press Union of Liberia in a statement.

Jallah Greyfield, acting president of the union told AFP of another incident during a conference at a police station in the city of Kakata in western Liberia, where a journalist was "brutalised" for asking a question an officer did not like.

"We have been receiving complaints from journalists about police violence on a daily basis for months now," said Greyfield.

A police spokesperson contacted by AFP refused to comment on the allegations.

Liberia has in the past come under fire from international rights groups for undermining press freedom.

In 2013, an editor of one of the country's leading newspapers was jailed over the paper's reporting on government corruption, however libel charges against him were later dropped.

The Committee to Protect Journalists (CPJ) has also cited an increase in harassment of reporters and media houses over their critical coverage of the government's handling of the Ebola epidemic.

In August last year, "dozens of police officers, without a court warrant and giving no official reason, used tear gas when they stormed the Chronicle's offices in Monrovia" and closed it down, beating three journalists, said the CPJ, referring to an incident at the National Chronicle newspaper.

At the time government spokesman Isaac Jackson told the CPJ the act was to "prevent the Chronicle from publishing further reports that would 'incite' an already disenchanted populace frustrated with the Ebola scourge."