Egypt to try suspects in foiled attack on temple tourists 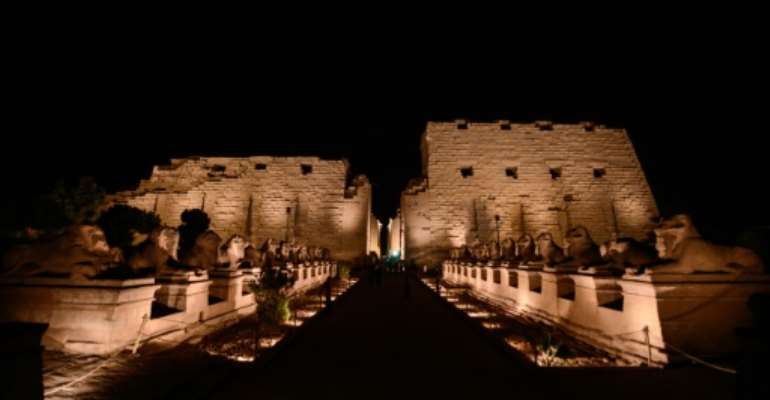 The avenue of Sphinxes leading to the Temple of Amun at the Karnak temple complex in Luxor. By Mohamed el-Shahed (AFP/File)

Cairo (AFP) - Egypt has referred 12 men to military trial for alleged involvement in a cell behind a narrowly averted attack on tourists at a pharaonic temple in June, prosecutors said Thursday.

The assailants had been recruited by the Islamic State group's Egyptian affiliate, along with two "foreigners" who were killed in the incident at the Karnak temple in Luxor, the prosecution said in a statement.

Eight of the suspects had been arrested and four were still on the run, said a prosecution official. Their nationalities were not immediately clear.

The June 10 attack was foiled by a suspicious taxi driver and police.

One of the assailants blew himself up and police shot dead another before they could attack any tourists.

A third, an Egyptian, was mistakenly wounded by a stray shot from another militant and arrested, the prosecution said.

Militants have carried out dozens of attacks in Egypt since the army overthrew Islamist president Mohamed Morsi in 2013 and cracked down on his supporters.

Most of the attacks have targeted soldiers on the Sinai Peninsula where the Islamic State group's affiliate is based.

But the jihadists have also struck elsewhere, setting off car bombs in front of police headquarters in Cairo and the Nile Delta.

The suspects involved in the failed June attack had been recruited by the Ansar Beit al-Maqdis group, the prosecution said.

The Sinai-based group, which has killed hundreds of soldiers and policemen in attacks, pledged loyalty to IS in November.

The group had attacked tourists before, in a suicide bombing in early 2014 that killed three South Koreans and their Egypt driver at a south Sinai resort town.

The attacks revived fears of more attacks on tourists such as the one's the devastated the industry in Egypt in 1997 and between 2004 and 2006.

In 1997, Islamist militants killed dozens of tourists at a Luxor temple during a militant insurgency against then president Hosni Mubarak.

Between 2004 and 2006, militants set off bombs in three beach resorts in south Sinai, killing dozens.