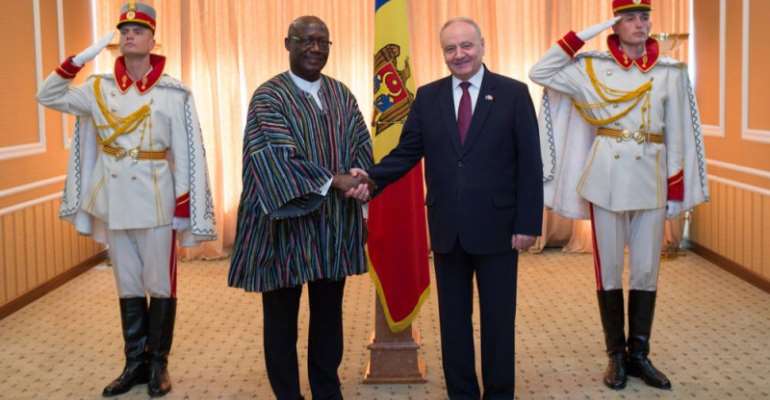 On August 25, Dr. Kodzo Kpoku Alabo, Ghana's Ambassador Extraordinary and Plenipotentiary to the Russian Federation & Commonwealth of Independent States (CIS) presented his Letter of Credence to His Excellency (Mr.) Nicolae Timofti, President of the Republic of Moldova.

As President of the Republic of Moldova and as Head of the State, Mr. Nicolae Timofti highlighted new areas of economic cooperation of his country and underscored progressive ways to deepen mutually bilateral economic relations with foreign countries. He stressed that the primary tasks of his government is to attract corporate investments and create a favorable business climate for all investors both foreign and local ones.

While expressing satisfaction with the rapid developments in the country, Ambassador Alabo also enlightened, His Excellency, President Timofti about economic and business opportunities that have emerged in various sectors and that are available for foreign investors in Ghana, adding that the Government of the Republic of Ghana has taken steps aimed at working towards good governance, creating conducive investment climate and economic development.

During the discussion with the President, Dr. Alabo proposed, among other things, cooperation in two key areas: 1) Moldova resuming the training of specialists for Ghana's economy, particularly in veterinary medicine (for which Moldova was well-known during the Soviet era) through the grant of scholarships to Ghanaian students; 2) Ghana to assist football development in Moldova through an arrangement whereby skillful Ghanaian players would be granted permission to ply their trade in the Moldovan League. Both proposals were readily accepted for further consideration.

In July 2014, President John Dramani Mahama appointed 12 Ambassadors among them Dr. Kodzo Kpoku Alabo and tasked them to seek trade and other commercial partnerships that would support the Better Ghana Agenda of the governing National Democratic Congress (NDC) and enhance the economic development of Ghana.

Recognizing that Moldova has some business opportunities and economic potentials that it could offer Ghana, Dr. Alabo pointed out in comments after the presentation ceremony that "there is the need to develop strong bilateral economic and trade cooperation with the Republic of Moldova."

Later, the Ambassador's delegation had two significant meetings: the first was with the Deputy Foreign Minister in charge of Bilateral Relations, Mr. Tudor Ulianovschi, during which the two sides, at length, exchanged views and reviewed bilateral relations and concluded that the level of economic, commercial and cultural exchanges between the two countries were far below the potential and further agreed to do more intensively to close the existing gap in the interests of both countries.

Further, it was agreed to invite business and industry directors as well as government officials from the Republic of Ghana to attend the "Made in Moldova Fair" planned to take place in Chisinau in February 2016, and on the other hand, Moldovan businesses to be invited to fully participate in the Ghana/Russian Business Forum to be organized in April 2016 in Moscow. The Ambassador has also invited the Moldovan Trade/Business Mission to pay a working visit Ghana during the second half of 2016.

The Ghanaian delegation later toured the city of Cricova, 15 km from Chisinau, reputed to be the largest underground wine cellar in the world. The city is a popular destination for foreign tourists. In the evening of the same day, the delegation attended the Presidential reception to commemorate the Independence Anniversary of Moldova. It declared itself as an independent state in August 1991 after the collapse of the Soviet Union.

Moldova is one of the former Soviet republics that fall under his diplomatic jurisdiction and thus Dr. Alabo and his delegation pledged to explore and exploit existing viable opportunities to raise bilateral cooperation and collaboration rapidly.

As a priority, the Embassy of the Republic of Ghana, located in Moscow in the Russian Federation, will soon embark on consultations with industries, business enterprises and potential investors to identify possible ways of investing in different areas such as science, technology, engineering, mining, energy and agriculture.

Moldova is a country in Eastern Europe, landlocked between Romania to the west and Ukraine to the north, east and south. Moldova is known for its wines. The country has a well established wine industry. Most of its wine production is made for export. It is also a major supplier of agricultural products in southeastern Europe. The country earns revenue from tourism which focuses on the country's natural landscape and its history.

Over the past few years, Moldova has made significant progress towards achieving and retaining macroeconomic and financial stabilization. In 2013, for instance, it experienced better than expected economic growth due to increased agriculture production, to economic policies adopted by the Moldovan Government since 2009.

As a part of an ambitious economic liberalization effort, the Government of Moldova has introduced new economic policies, structural and institutional reforms, has entered into agreements with the World Bank (WB) and the International Monetary Fund (IMF) to promote sustainable economic growth.