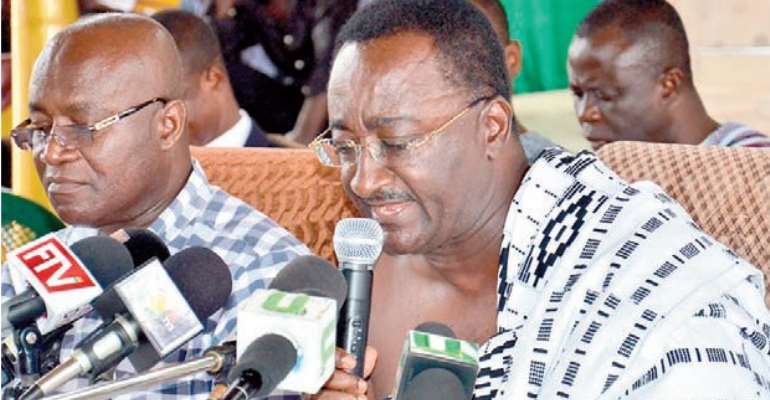 The New Patriotic Party (NPP) Select Committee on Agriculture has described the government's performance in the agricultural sector over the years as stagnant and sluggish, leading to hunger and malnutrition among Ghanaians.

At a press conference at Goaso in the Asunafo North District of the Brong-Ahafo Region, attended by leadership of the NPP parliamentary caucus and farmers in the region, the party's ranking minister for food and agriculture, Owusu Afriyie Akoto, statistically catalogued how poor the Mahama-led government has failed in the sector, saying 'if allowed to continue, will grind the economy to a halt.'

He described the targeted budgetary growth of 5.8% in 2015 as overstated because it would not work due to sharp reduction in cocoa production – less than 700,000 metric tonnes – and also rising retail prices of fertilizer and other farm inputs in 2015.

According to him, annual growth of 3.8 % from the last five years with an average oil growth of 6.7%, would lead to the Dutch disease, if care was not taken.

On staple food production, Dr Owusu Afriyie said maize and rice production had been fluctuating leading to increase in import – from 384,400 metric tonnes in 2009 to 645,000 metric tons in 2013. There was however, steady growth in root and tuber production, attributing this to 'Kufuor's policies.'

He attributed the historical peak performance in cocoa production from 2010 to 2011 to President Kufuor's NPP administration's mass spraying and high technology initiatives. But due to poor NDC policies, he noted, production had declined to a lower level of 700,000 metric tonnes in the 2014/2015 crop season.