Another 2,200 migrants rescued off Italy as tensions mount 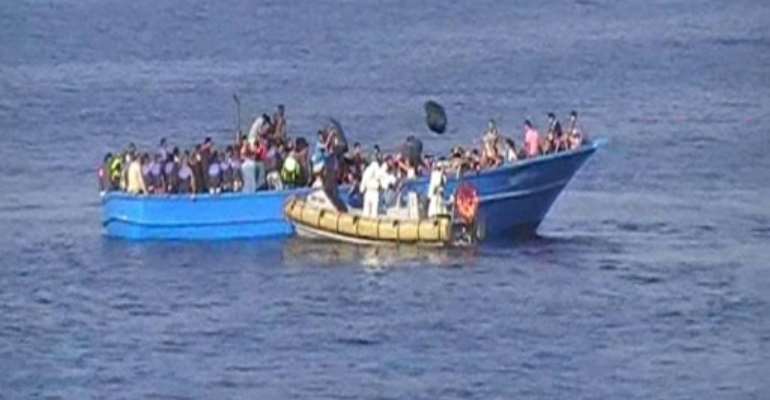 An Italian Navy inflatable boat (front) rescues migrants on a fishing boat off Libya on August 15, 2015. By (Marina Militare/AFP/File)

Rome (AFP) - Italy's coastguard on Saturday coordinated the rescue of 2,200 migrants in the Mediterranean after receiving distress calls from more than 20 overcrowded vessels drifting in waters off Libya.

One of the biggest single-day rescue operations to date was ongoing as nightfall approached.

It was unclear how many people remained in danger. Initial estimates had put the total number of people on board the stricken ships at up to 3,000.

Two navy ships, the Cigala Fulgosi and the Vega, picked up, respectively, 507 and 432 migrants from two wooden boats in danger of sinking just off Libya, the navy said. The coastguard said its patrol boats had safely boarded just under 300 people from three different inflatable dinghies.

Another 1,003 rescued migrants and refugees were reported to be headed for Italian ports on other boats as the wave of new arrivals triggered increasingly virulent attacks on Prime Minister Matteo Renzi's handling of the migration crisis.

"This must a joke. We are using our own forces to do the people smugglers' business for them and ensure we are invaded," said Maurizio Gasparri, a senator for Silvio Berlusconi's centre-right Forza Italia party.

Matteo Salvini called on the government to park the migrants on disused Italian oil rigs off Libya.

"Help them, rescue them and take care of them: but don't let them land here," the leader of the anti-immigration Northern League wrote on his Facebook page.

The rescued migrants included a batch of 311, including a new-born baby, who were on a boat belonging to humanitarian group Doctors without Borders (MSF) which is expected to dock in Vibo Valentia in Calabria, according to port authorities there.

A further 370 had been picked up by the Italian customs police and were headed for Messina in Sicily while some 322, according to Italian media, were on the Norwegian boat Siem Pilot, part of the European Union's Triton mission.

Just over 170,000 migrants and refugees from Africa, the Middle East and South Asia landed at Italy's southern ports in 2014 after being rescued in the Mediterranean, while the total for 2015 has already topped 104,000.

A further 135,000-plus have landed in Greece since January and more than 2,300 people have died at sea while trying to make it to Europe with the help of traffickers.

Police in Palermo, Sicily, announced Saturday that they had arrested six Egyptian nationals on suspicion of people smuggling following the rescue of a stricken boat on August 19.

Testimony from the 432 migrants on board suggest the vessel had been packed with more than ten times the number of people it was designed for, with many of the passengers, including a number of women and children, locked below decks.

They had each paid the traffickers 2,000 euros ($2,200) for the passage from Egypt to Italy, according to statements given to police.

On board, the crew were reported to have demanded further payment to allow those locked in the hold to come up temporarily for air.

Humanitarian organisations say the surge in the numbers of people trying to reach European Union countries is the result of conflicts or repression in Africa and the Middle East.

They have called on European governments to shoulder more of the burden of absorbing the wave of asylum seekers and to help create safer routes for them to reach Europe.