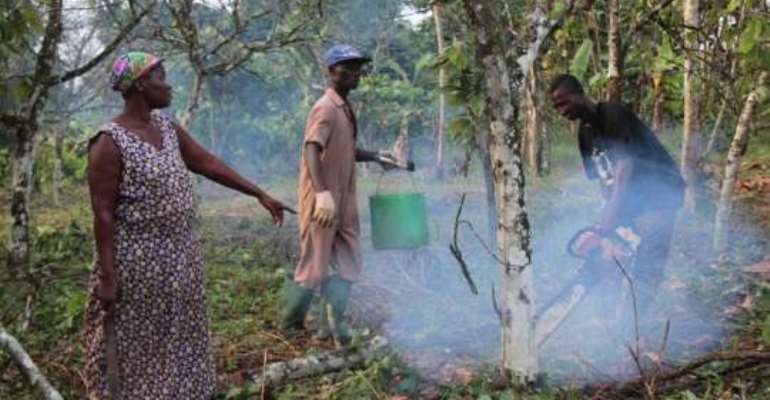 He advised cocoa farmers to fully utilise the programme for higher yields during his visit to some rehabilitated cocoa farms in the Western Region.

Ghana's average annual cocoa production is about 800, 000mt, a level that, the industry regulator COCOBOD is making efforts to raise with the introduction of a number of interventions including distribution of free fertilizer, free hybrid seedlings, as well as the implementation of youth in cocoa initiative.

Diseased and old farms known as moribund farms, account for low yields. These two cover approximately 40 per cent of the total cocoa tree stock in Ghana, while old farms equal 23 per cent of the remaining 17 per cent represent diseased farms.

Mr Amponsah emphasised said COCOBOD is embarking on the programme for cocoa farmers to replace their old or diseased trees with early bearing, high yielding and disease resistant hybrid seedlings.

'COCOBOD will continue to give technical support to the farmers in this direction to consolidate their success in the cocoa farm rehabilitation programme,' he said.

At Abosikrom in the Debiso District, Charles Korang Kyeremeh, a cocoa farmer had cut down 12 acres out of his 45- acre farm in an attempt to address the Cocoa Swollen Shoot Virus Disease (CSSVD).

He said the only way to sustain his farm is to adhere to the guidelines given by the cocoa officers.

A 59- year- old Madam Hannah Fordwuor of Obengkrom near Dadieso is also making progress with her cocoa farm rehabilitation programme.

So far, she has cut and replanted 23 acres of cocoa farm and is still in the process of cutting the remaining 20 acres.

In the Nkrankwanta District of the Brong Ahafo region, a number of farmers have voluntarily agreed to embark on the programme as a means of treating their farms.

The devastation of cocoa farms in the area due to CSSVD is enormous; however, with the support of the technical officers of COCOBOD, some farmers have come to terms with the need to cut down diseased cocoa trees in return for higher yields.

I Wish You Die In Prison — Judge To Convict Who Defiled His ...
35 minutes ago