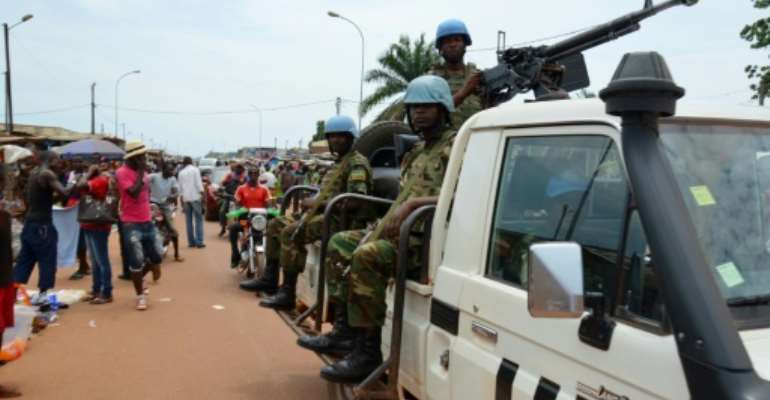 United Nations (United States) (AFP) - The United Nations slapped sanctions on a diamond firm from the Central African Republic and three militia leaders for undermining security in the troubled country.

A UN sanctions committee imposed an assets freeze on the Badica/Kardiam firm for providing support to armed groups in the Central African Republic through illegal trading in diamonds and gold.

The action followed the seizure by Belgian authorities in May 2014 of diamond parcels sent to Badica/Kardiam's representative in Antwerp in violation of a 2013 ban on diamond trading, the committee said.

The Central African Republic descended into bloodshed after a 2013 coup against longtime leader Francois Bozize that unleashed a wave of violence, pitting Christian anti-balaka militias against Muslim Seleka rebels.

The sanctions committee slapped a global travel ban and an assets freeze on anti-balaka militia leader Alfred Yekatom, known as Colonel Rambo, who operated in Bangui and several other towns.

Yekatom commanded a "large group of armed militiamen present in the PK9 neighborhood of Bangui" who controlled a dozen checkpoints, collecting "unauthorized taxes" from vehicles and trucks exporting lumber to Cameroon and Chad, according to documents released by the committee.

An anti-balaka commander for the province of Lobaye, Habib Soussou, was added to the sanctions blacklist as was a former Seleka general, Oumar Younous, described as a diamond smuggler close to former president Michel Djotodia.

Under Soussou's command, targeted killings, clashes and attacks on aid workers have taken place in Lobaye province, the committee said.

Younous, who has a Sudanese passport, is cited for his role in the illegal diamond trade from the Central African Republic to Sudan.

The sanctions were announced as the Central African Republic prepares for key parliamentary and presidential elections in October, seen as a test of the country's progress in its political transition.

You're A Covenant Keeping Leader — Ahafo Chiefs To Akufo-Add...
25 minutes ago