The Macedonian Call To Medical Doctors 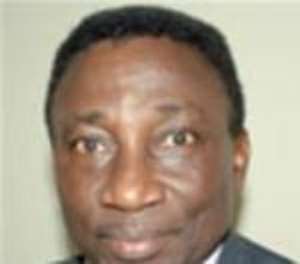 Now, when they had gone throughout Phrygia and the region of Galatia they were forbidden of the Holy Ghost to preach the word in Asia. After they were come to Mysia, they assayed to go into Bithynia: but the spirit suffered them not. And they passing by Mysia came down to Troas. And a vision appeared to Paul in the night; there stood a man of Macedonia and prayed him saying, come over into Macedonia and help us'.

Acts 16:6 - 10
COLONEL ADJEI YEBOAH of the 37 Military Hospital, Accra, cannot stand accused for inviting the 'public sector doctors who voted last Friday to resume work at a crucial meeting of the Ghana Medical Association (GMA) to complement the work of medical officers at the hospital to save lives'.

The Public Relations Officer of the 37 Military Hospital, Captain Rita Anane, made the appeal on behalf of the hospital and requested the Ministry of Health to 'post those 148 doctors to the security hospital to reduce the stress on medical officers there'.

The impasse between the government and the medical doctors is not pleasing to the ear of the medical doctors and not pleasing to the ear of any well - meaning Ghanaian. Prominent members of the public have expressed their concerns and appealed to the striking doctors to resume work while the negotiations over their demands went ahead. These include President John AgyekumKufour and OsagyefoAmoatia, Kyebihene.

However, in the interim, people are asking whether the appeal by the 37 Military Hospital is workable? Snippets of the report from the last doctors' meeting reveal that not a single doctor demurred on the continuation of the strike. The voting was rather on the inclusion of the emergencies on the list of 'forbidden cases'

People are asking further: 'Suppose some of the 'agreeable doctors' are in various hospitals outside Accra, what happens to those hospitals they will be deserting'? Furthermore, will a picture of 'good' doctors versus 'bad' doctors not be created; that is the 'good' doctors heeded the call and assisted at the 37 Military Hospital while the 'bad' doctors remained adamantine and continued with the strike?

The invitation is however very much like the Biblical 'Macedonian call', in which Paul saw in a vision a man inviting him to Macedonia to preach to them and save them from sin.

The 'doctor-government tango' has now become part of Ghana's history. It is unfortunate that the strike action has been allowed to drag on for so many weeks, just because of the recalcitrance on the part of the parties separately. Who is not seeing reason? Words like 'senseless', 'unpatriotic' 'illegal', have been thrown at the doctors, and the government communicators have been strengthened in their resolve to spew invectives at the doctors.

The Minister for Employment and Labour Relations, an otherwise soft - spoken genteel and affable gentleman poses a subtle threat when he says: 'Government will continue negotiations with the GMA only if they call off their strike action and come back to the negotiating table for us to dialogue further on putting closure to the whole subject of getting them a codified condition of service'.

Mr Alex Segbefia, the Minister of Health proposes the retention of 16 Cuban doctors who have completed their term and are due to return to their country. Besides, he stated that processes are ongoing for about 177 Cuban doctors to be brought into the country to assist in healthcare delivery at the time Ghanaian doctors remain on strike. MrSegbefia adds that with effect from 20th August 2015, those Ghana Medical Association members who are not at post would be taken to be on strike and therefore, in breach of the Labour Act.

The Minister of Health states the government's position, as he notes: 'Government has indicated that it cannot negotiate with doctors while they are still embarking on an illegal strike. Government recognises the right of workers to negotiate for better conditions of service. Without prejudice to the right of the GMA to negotiate for better conditions of service, government considers the impact of the strike on the lives of Ghanaian as unacceptable'.

To say that our health delivery system is erratic is to say the obvious. There is no denying the fact that the doctor - to - patient ratio is way down the UN recommended ration. While we in Ghana are churning out many art graduates, other countries, including Cuba make sure they 'produce' doctors for their own nation as well as 'producing' doctors for 'exports'. Doctors in Ghana are in high demand- they would be called 'scarce commodities 'if they had been objects and not human beings.

There will be time to talk about the processes of 'producing' doctors in Ghana - qualifications, the procedures, the training and other relevant connections. For now, our focus should be on the impasse that is the strike action embarked upon by the doctors.

We should be careful about being too legalistic; some doctors will see the introduction of 'legalism' as 'intimidating'; some people in government will see the negotiations as pandering to the dictates of the doctors. Those doing the negotiation should aim at a win - win resolution and the atmosphere should be conducive to both parties; and if any organisation would join the government and the doctors, let it not be a case of using a calabash which is capable of breaking. The Akans have a proverb: 'Twe - ma - me - ntwenaemakoraabo' (to wit, it is the pull by two contending parties that breaks the calabash.)

Even our courts of law have found it necessary to encourage 'Alternative Dispute Resolution' where strict interpretation of, and adherence to law is shelved and parties are encouraged to adopt other means of 'resolving ' their 'disputes.' One would encourage the parties to stop throwing punches and think only of an amicable resolution. In the spirit of 'give - and - take'; let the parties 'cool down tempers', and secure a lasting solution.

The last meeting showed all Ghanaians that the demands by doctors have not been a 'one - man  show' initiated by the President, Dr KwabenaOpoku - Adusei  or the General Secretary, Dr Frank  Serebour, or any other individual doctor including Dr Justice Yankson. The totality of the doctors must have been infuriated by some of the remarks by certain NDC communicators and propagandists. These included Anita de Sosoo who urged government to call the doctors' bluff and import Cuban doctors to replace the striking doctors. Nunoo-Mensah suggested to the striking workers to go and play football, to earn as much as the footballers earned. Perhaps, what ired them most was the suggestion that their action was being spurred on by the Opposition NPP.

Thus, it meant the doctors had no minds of their own, and until someone 'pushed' them, they did not know what and how to demand from government to make their lives better. A crude way of politicking, some people think. The Full Gospel Men's Fellowship urges the striking doctors to resume work, and argues: ''A resumption of work will not amount to recapitulation. It will rather prove the maturity of the leadership and a willingness to heed the several appeals by well-meaning Ghanaians.' The statement continues: 'Our concern is the needless and avoidable deaths the hospitals are recording daily and the pile-up of corpses in the mortuaries''.

AlhajiJawula, the Leponwura, adds his voice to the call on the doctors to end the strike. He says: 'The discussions are moving towards the propaganda level and I am not comfortable with that. People know where I stand politically but issues of health do not know politics'. Need anyone say anything more?