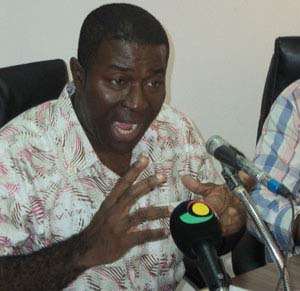 The New Patriotic Party (NPP) has rendered useless the defence of the existing voter register by the ruling National Democratic Congress (NDC).

Hours after the NDC held a press conference to rubbish the NPP's campaign for an entirely new voter register for the 2016 general elections, the party's Communications Director, Nana Akomea, hit back.

He could not fathom how a political party and government, whose ministers of state have urged Ghanaians to lie, fabricate and distort the truth, could describe the NPP's findings as full of ignorance, falsehoods, incompetence, mediocrity, fraud, frivolous concoctions, lies and fabrications and that they (NPP leaders) were preparing the grounds for 'our imminent defeat in the 2016 elections.'

He denied claims by the governing National Democratic Congress that it (NPP) singled out constituencies in the Volta Region to support its claims that the current register is bloated.

According to him, such claims are 'false.'
In a statement issued in Accra yesterday minutes after the NDC press conference, the NPP asked rhetorically whether 'when the NDC went to court over the 2004 election outcome they were preparing the grounds for their imminent defeat? Or when then running mate, John Mahama, said in 2008 that 'with the current national population of 22 million, having almost 13 million people on the register is unheard of', he was preparing the grounds for their imminent defeat?'

False Claims
Nana Akomea described as false Johnson Asiedu Nketia's claim that the Togolese register that Dr Bawumia used to illustrate the thousands of cross-border registrations was fake and a 'deceptive manipulation of pictures with no resemblances, no names, no ages nor gender.'

That, the NPP communication director said, was due to the fact that 'The original documents of the Togolese register submitted by the NPP to the Electoral Commission has clear headings, names, ages and genders of people.'

The EC will hold an IPAC meeting on the NPP's petition on Friday. It will be the first major assignment of the new EC chairperson, Charlotte Osei.

Nana Akomea therefore advised the NDC guru to also access the Togolese register and check out the cross-border registrations for himself and not reduce such a serious matter to mere politicking.

'The NPP has presented evidence for examination by all parties as a basis for the call for a new voter register. How such a call can be described by Asiedu Nketia as motivated by malice just to raise political tensions and mask the NPP's disunity is difficult to understand,' he said.

Justification
Instead, Nana Akomea said, 'The NPP is motivated by the same concerns for the integrity of the electoral process that motivated John Mahama to remark for example in 2008 that a 'register over 50% of the population is unheard of,' that motivated Afari-Gyan to remark in 2008 that 'a register in excess of 50% of the population will be statistically unacceptable by world standards.'

'The point will still hold that the register for the parliamentary elections and the presidential elections had a difference of over almost five hundred thousand (500,000) voters that we have still not accounted for.'

Responding to Asiedu Nketia's claim that the NPP deliberately singled out the Volta Region in its analysis of the existing voter register to treat them with disdain, Nana Akomea described it as totally false.

'Out of the thirteen constituencies Dr Bawumia listed as having dramatic increases, only three (i.e. Ketu South, Hohoe and Nkwanta North) are in the Volta Region,' he stressed.

Denial
Apart from that he also noted that 'It is not true that Dr Bawumia did not make adjustment for population growth between 2010 and 2012.'

That notwithstanding, he said, 'Dr Bawumia did the adjustment to 54% to account for the population growth,' noting that it was still way over the 50% mark.

Reacting to the NDC General Secretary's suggestion that the NPP was calling for retroactive application of the Supreme Court ruling on the NHIS cards in order to disenfranchise voters who registered with the NHIS cards, the NPP communicator said it was not true.

'Indeed, the only people who may not be able to re-register will be non-Ghanaians from neighbouring countries who were issued NHIS cards to register,' were his exact words.

The NPP has, however, welcomed the NDC's recommendation for modifications that could prevent wanton registration of minors.