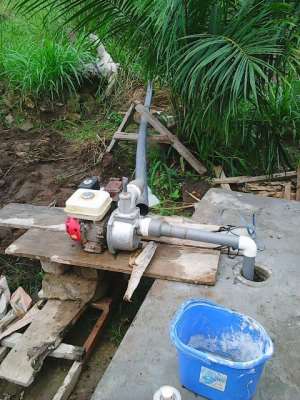 Ho, Aug. 18, GNA - A sanitation disaster is looming in the Ho Power House area where some households dislodge human excreta into drains and bushes nearby.

Septic tanks in those houses are connected to drains which have been choked with human faeces.

Pumping machines are sometimes used to dislodge faeces in the septic tank into nearby bushes.

Mr William Ahashie, the Unit Committee Member in the area, said the stench from the discharge was unbearable and upsetting.

Checks by the GNA indicated that the houses, which belong to a traditional ruler from one of the communities near Ho, were connected through underground pipes to discharge waste into the gutter.

He told the GNA that he was working to rectify some defects in the construction of the septic tanks to correct the nuisance.

Meanwhile, the Towns Ordinance Cap 86, section 6, states that, 'a person who acts knowingly and willfully contrary to an order of prohibition is liable to a fine of 500 penalty units per day during the contrary action.'

Mr Samuel Hansen-Galley, the Ho Municipal Environment Health Officer said the houses involved were being processed for court and with notices to stop the practice.

He said the situation could cause cholera, typhoid, diarrhoea and other related diseases.

Ho recorded a few cases of cholera and other related diseases last year, in which some lives were lost.

Free SHS Graduates Gather To Campaign For NPP
38 minutes ago