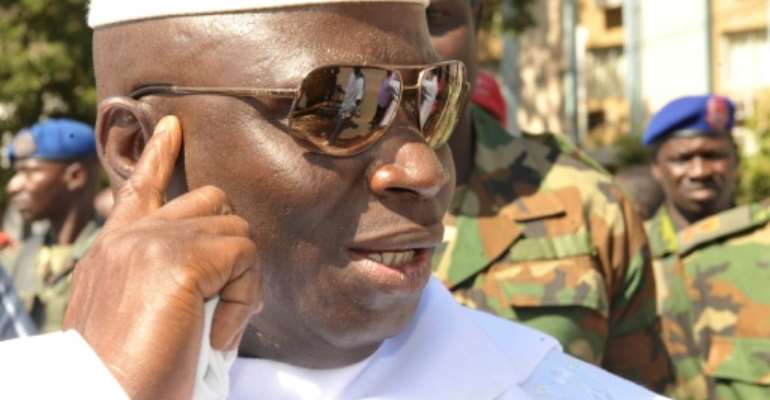 Gambian incumbent Yahya Jammeh speaks to journalists on November 24, 2011, as he leaves a polling station in Banjul after voting in the presidential elections. By Seyllou (AFP/File)

Banjul (Gambia) (AFP) - Gambia sought Tuesday to transfer the sedition case against a high-profile journalist, who was twice allegedly abducted by secret police, to a higher court and add six charges against him.

Alagie Ceesay, manager of the Teranga FM radio station, made a brief appearance in a magistrates court in the capital Banjul where he has pleaded not guilty to one count of sedition.

The charge was based on allegations that he had distributed pictures by mobile phone of a gun pointed at President Yahya Jammeh "with the intention to raise discontent, hatred and disaffection amongst the inhabitants of the Republic of The Gambia."

Prosecuting police officer, Inspector Almamy Manga, told the court he had been ordered by the state prosecutor to refer the case to the high court.

A source at the magistrates court said the state intends to add another six counts of sedition and one count of false news, without giving further details.

Ceesay has had several brushes with the law in the tiny country whose iron-fisted leader is regularly accused of rights abuses and repression of the media.

He was arrested and questioned by police when authorities shut Teranga FM, based in Banjul, for several days in January.

The journalist then disappeared outside his radio station's headquarters on July 2 after two men thought to be officers from the west African nation's feared National Intelligence Agency (NIA) bundled him into a car.

He reappeared 11 days later after being "dumped in the streets" according to a local press union, only to be abducted again on July 17.

The United States weighed in, saying it was "deeply concerned" about the disappearance.

Eighteen days after he vanished, a weak and tired-looking Ceesay appeared in front of magistrates in Banjul on August 4 where he was asked to plead on the sedition charge against him.

The case has been adjourned to September 1.