Humanism And Anti-Intellectualism In Nigeria 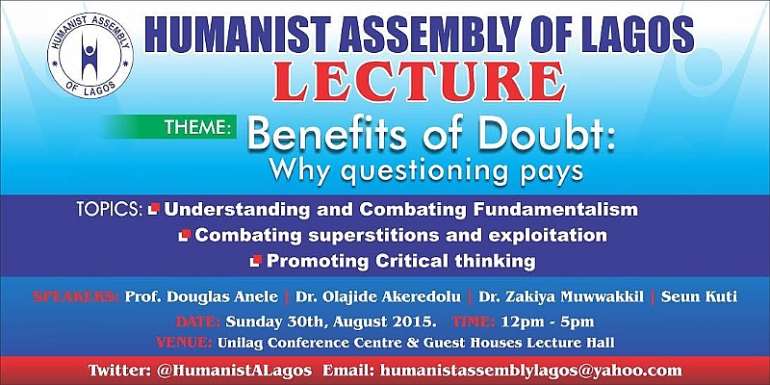 A lot has been said about militant Islam and extreme Christian, traditional religious practices in Nigeria. There has been much focus on violent attacks by the jihadist group, Boko Haram, on the abuses perpetrated by sharia policing agencies and the nefarious activities of homophobic pentecostal churches and witch hunting pastors in the country. Unfortunately not much attention has been paid to the efforts of humanists, atheists, skeptics and agnostics in the country to address these problems. Not many Nigerians know about the campaigns by humanists against witch hunting, blasphemy law and harmful traditional practices. In fact not many Nigerians know that humanists and humanist groups exist in the country.

Thanks to the internet, things are beginning to change. There is a growing visibility of humanists and humanist activism. For instance the Humanist Assembly of Lagos is organizing an event at the University of Lagos Conference Centre on August 30th, 2015. The theme of the event is "Benefits of Doubt: Why Questioning Pays". This event offers them an opportunity to examine many issues of national importance. Nigeria is a secular state. Adoption of state religion is prohibited and freedom of religion and belief is guaranteed in the constitution. But in practice Nigeria is a theocratic state. Religion and politics mix in a way that stifles debate and conversation. Islam and Christianity are state religions.

Non-Muslims are treated as second class citizens because Islamic privilege is institutionalized in the region. There is virtually no political will to abolish discriminatory islamist policies, separate mosques and state and promote equal citizenship. In fact under sharia law, renouncing Islam is a crime punishable by death and expressing ideas that are critical of Islam or prophet Muhammad are easily interpreted as a form of blasphemy which is a capital offence. There is no freedom of belief, no freedom of religion, no freedom of expression and association for non-Muslims, ex-Muslims and non-religious people. Atheists and skeptics in sharia implementing states live in social and mental prisons. The punishment for apostasy is death so those who have openly renounced Islam live in constant fear of their lives.

In the South, the Christian majority states operate as Christian theocracies under the heavy influence of Bishops and other church clerics. Schools are extensions of churches and Christian religious indoctrination is pervasive in classrooms. The intensive religious brainwashing has worsened the state of insecurity, uncertainty and anxiety in the country. The ubiquitous pastors and prophets manipulate and exploit the local population with impunity, particularly poor, ignorant, desperate miracle seeking members of the population.

So when Humanists assemble in Lagos at the end of the month, they have a lot to discuss. They will be weighing in on how to combat religious fundamentalism, dogma and superstition, how to tackle the threat posed by Boko Haram, militant Islam, political Islam, sharia police, and pentecostal christianity to peace and human rights in the region. They will be brainstorming on how to encourage critical thinking and get Nigerians to exercise their will to doubt, explore and express new ideas. Superstition will come under scrutiny. Harmful cultural practices will be critically examined.

When humanists meet later this month, they will be discussing how to encourage Nigerian children, youths and adults to question all ideas including religious doctrines and beliefs. There will be a special focus on the situation of skeptics and ex-Muslims in Northern Nigeria where questioning Islamic teachings is Haram!

When humanists meet in Lagos, they will be brainstorming on the humanist state of the nation and how to realize a more secular, tolerant and critical thinking society.

But at the end of the day, are humanists in Nigeria able to generate a critical mass that can reverse the trend of anti intellectualism in the country?