As JAK strikes in K'si, JJ Goes Wild In Oguaa 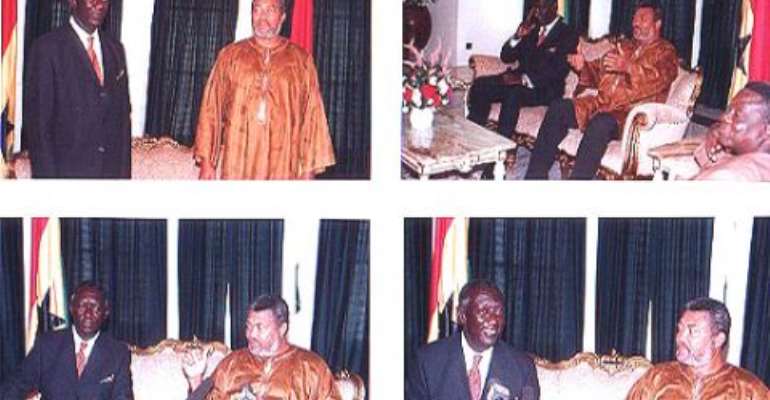 'Kufuor is supervising the worst corruption I've ever seen' - Rawlings Ex-President Jerry John Rawlings last Sunday dug into his arsenals and delivered hefty allegations of corruption against his successor, President John Agyekum Kufuor, few miles away from the Jackson Park, Kumasi, rally of the ruling New Patriotic Party (NPP), where the sitting President was also lambasting him and his party for talking 'by-heart'.

After commanding what comes across as the biggest crowd ever to have gathered at Cape Coast in recent times, with almost all businesses coming to a near standstill, Rawlings told them that Kufuor was supervising the worst level of corruption he has ever seen since he was born some 51-years ago.

He said the incidence of “mass corruption and injustices” in the Ghanaian society was worrying, adding that the level of corruption in the country was an insult to the integrity and dignity of Ghanaians.

Rawlings said the truth, freedom and justice have been sacrificed by the ruling government.

According to him, the media, judicial service and the security agencies have been transformed into “tools of oppression”, which if not checked would worsen the corruption and injustices in Ghana.

He express the belief that there was a “peaceful revolution” going on in the country and called on Kufuor's administration to listen to the voice of the people crying for the restoration of their dignity.

Continuing, Rawlings expressed his disappointment in the dispensation of democracy in the country and urged NDC supporters and Ghanaians to use the December elections to resist the 'oppression' they were going through by voting the NDC back to power.

He said until this was done, freedom would elude them forever.

The presence of Rawlings, who was in the Central regional capital to join members and supporters of the regional branch of the National Democratic Congress (NDC) in a keep fit exercise, brought almost every business to a halt when sections of the public lined-up the streets of the municipality to catch a glimpse of him and his team who paraded some of the streets amidst brass band music and displays by motor cycle and bicycle riders.

The former President thanked the people for the massive support they gave the party and asked them to transform it into votes on December 7.

Dr Ato Quarshie, Regional Chairman of the NDC, urged the people not to repeat the mistakes they made in the 2000 elections.

“You should come out in your numbers to vote for Prof John Atta Mills. The region has never produced a President and this year is for you to produce one”, he said.

He said Mills was the only saviour for the region and would help change its fortunes if elected president and called for peace and unity among the party's rank and file. Mr Burton Oduro, parliamentary candidate for the Cape Coast, told the people to appreciate the good things the NDC did for them and vote it back to power.

He said others would like to use money to deceive them for their votes but that they should consider their living conditions and vote wisely.