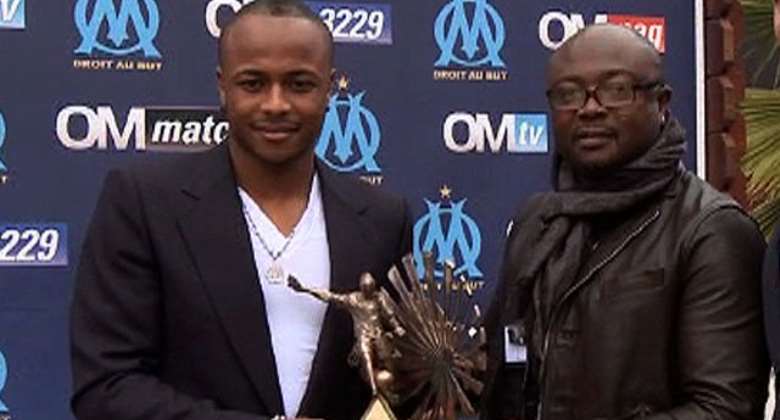 Not since Tony Yeboah arrived at Leeds in 1995 to play in the English Premier League [EPL] has the name of a Ghanaian footballer captured the lips of football fans in England – and other parts of the world – as that of Andre Ayew of Swansea City did on the opening day of the EPL on 8 August 2015.

To score a goal in the Premier League on one's first appearance in it is spectacular. To score it against the reigning Champions, Chelsea, and force them to draw a game they needed badly to win in order to stamp their authority on the IPL and retain the championship, – was to write one's name indelibly into the history of the League.

It may be thought that as a Ghanaian, I am biased in favour of Ayew. So I shall leave the gushing praise on him to others. The Daily Mail, which is normally not too friendly to foreigners, comes first. Its website described Ayew's feat thus:

“Swansea new boy, Andre Ayew, could be the one to watch this season... he already looks right at home, following move from Marseille...

By Jamie Redknapp for the Daily Mail

“After scoring on his debut in an excellent draw at Stamford Bridge, Swansea fans will be delighted with Andre Ayew. He already looks like he has been at the club forever. His dad, Abedi Pele, was one of the greatest African footballers of all time, so he has top-class pedigree, and his brother, Jordan, is also a Premier League player at Aston Villa. But Andre looks like the one to watch.

“On Saturday [8 August 2015] at Chelsea, he was instantly comfortable with the pace of the game; his work rate was superb; and he showed some good skill. The little drag-back for his goal was class.

“In a crowded penalty area, he had the composure to roll it away from John Terry and give himself room to score. To do that in your first game is impressive but to do it at the home of the champions is even better.

The London Independent also had high praise for Ayew. It reported: “Andre Ayew, the summer signing, impressed on his debut, with his equalising goal in the first half a moment of real quality. Having seen his initial attempt blocked, the former Marseille forward showed great intelligence to drag the ball back before rifling home.”

And the website of Swansea City Football Club itself described Ayew's performance as a “dream debut”. It quoted Ayew as saying: “I was very happy with my goal, particularly as the squad has really helped me out." The website then commented: “The Ghana international made an instant impression at his new club as he showed his quality in front of goal to cancel out Oscar’s opening goal at Stamford Bridge.

“Ayew latched onto the loose ball inside the area, after Bafetimbi Gomis saw his header kept out by [Chelsea goalkeeper] Courtois, with the winger showing some neat trickery before finding the corner of the net.... Ayew, whose introduction to English football included a few stitches [near his eye] following an aerial clash with Gary Cahill, was delighted with the display from the Swans.

“They [Chelsea] are the champions with a great squad, but we managed to get a great result,” said a delighted Ayew. His hope was that he would be able to “continue working hard to help the team.... I had my first shot blocked. But I got up quickly and managed to score with the second shot. It was a really great moment for myself and, more importantly, the team.... e must keep the spirit we have. We showed a lot of character....We had to be careful even when we were attacking. As they were at home and this is the first game [of the 2015-16 season], it was important that we got a point.”

The website quote from Ayew concluded: “It was my first game in the Premier League and I’m always learning. The intensity is different and I have to work hard to get better and better, week-in week-out, for the team. But my team-mates, the manager and the coaches are all pushing me so that I can do more and more for the team.”

In his interviews, Ayew has exhibited remarkable cunning in always emphasising the role of “the team” more than his own performance. For players in the league in England have a way of pricking the egos of players who become an instant sensation in English football. Three Africans who became instant stars in England and then found the going tough afterwards – as passes to them seemed to dry up – are Senegal's Demba Ba (who made a spectacular entry into the EPL for Newcastle United); Ba's fellow countryman, Papisse Cisse (who also made an equally brilliant impression on the Premier League for Newcastle) and Emmanuel Adebayor (who became an adored figure –temporarily – at Arsenal).

Well, you heard it here first – if Andre Ayew maintains the form he exhibited on his Swansea debut – especially if he can constantly demonstrate that there are no fears about him as far as fitness is concerned – then he could enjoy an excellent career in Britain. His awareness of the fact that he needs to be able to integrate seamlessly into a Swansea squad that had been shaped before he joined it, needs to be so nuanced that Manager Garry Monk can instinctively encourage his midfield and forwards not to overlook Ayew when they get the ball. This is important because in Ayew's debut match, he often had to run to where the ball was, instead of being given the servicing he needed.

Garry Monk will have to ask himself, in all honesty: “if Ayew could produce the goods in such a special manner, even though he was new to our attacking system, then what can he do when he is made to be one of the kingpins in our attack?”

Will Ayew stay long enough at Swansea for the club's attack to be built around him? Garry Monk holds the key to that issue, for both in England, Spain and Italy, Ayew's performance at Swansea would have raised eyebrows. An intriguing fact is that the Chelsea Manager, Jose Mourinho, may have found Ayew's performance against his club somewhat embarrassing. This is because Roman Abramovich, the Chelsea owner, was at Stamford Bridge to see his club's faltering performance against Swansea. Abramovich may have asked,himself: “But where did this young goal-scorer come from? Why haven't we got him?”

Indeed, currently, there seem to be no stars of the Drogba type in the Chelsea side! Which means that Abramovich may begin to entertain doubts about Mourinho once more, with regard to talent-spotting. It is well-known that neither Mourinho nor Abramovich ever allows money to stand in the way of recruiting super-talented players and I, for one, wouldn't be at all surprised if Ayew were to become the target of their talent-hunting. He would certainly add a much-needed glamour to a Chelsea side that looks somewhat jaded.

But although it is early days yet, Ayew seems to be happy at Swansea. The South Wales Evening Post quotes him as saying that he “knew instantly” that he and Swansea City “are a perfect fit... He was linked with a host of big-name clubs over the summer, as he prepared to leave Marseille as a free agent. But he ended up signing for Swansea, after meeting the club's hierarchy and hearing their plans for the future. "I spoke to the manager and the chairman and they told me what the club wanted to do," said Ayew. "I can feel that the club are ambitious and I'm an ambitious person too. As soon as I had a discussion with the manager I knew it was the right place for me. Sure, there were other clubs but that's in the past. I've taken my decision and I know why I'm here. Hopefully we can continue to do well and it will be a great decision."

Ayew told the paper: "The goal is quite important, although scoring is not my first job. The most important thing is to help the squad win. … To get a goal is good for the confidence. … The guys have really helped me settle in, so if I score it's thanks to them....I never set myself a goal target. My target is for Swansea to win the maximum games....We had a good game on Saturday. It was difficult because Chelsea are the champions, but it was the first game and we were ready... We knew it was going to be complicated, but we have to stay focused, concentrate and hopefully win the next game. We have a great squad, some really good football players. We need to continue working hard and not get swollen-headed."