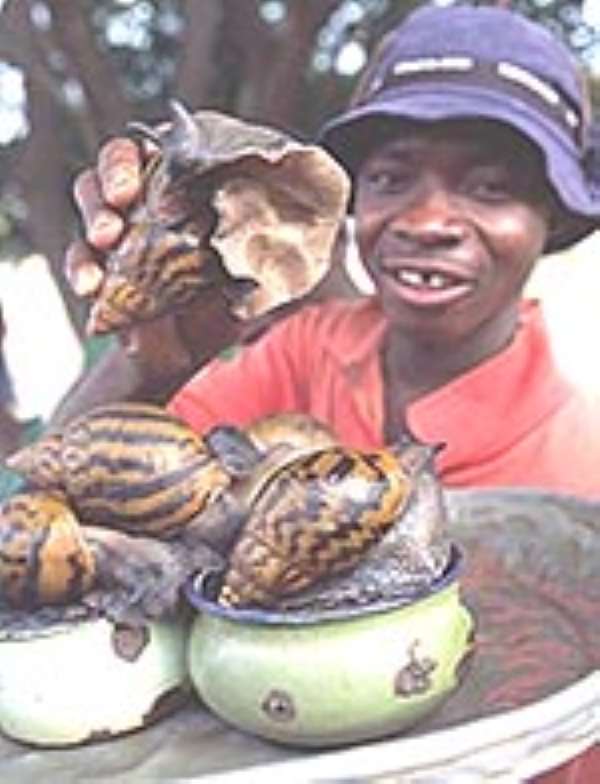 Ghanaians are rushing into snail farming because it's inexpensive and a very lucrative business contributing to about US $ 4 million per annum from America as imports. Ghana exported about 620 kilograms of snails in 1994 and 1,050 kilograms to the Netherlands and the United States respectively. Snail farming in Ghana has become such a lucrative business that agricultural experts are offering professional advice to prospective farmers to enable them to harvest more yield for the local and international market. Snails for food Consumption of snails in Ghana, a century old practice found within the Akan tribe, has prompted almost every Ghanaian throughout the country to consume this delicacy as a staple food well known to have nutritional value.
The snails are also important source of foreign exchange, “The meat is not only a delicacy but is a component of what the rural Ghanaian will call a complete meal,” said Adotei Brown, an expert in snail farming at Alternative Technology for the Livelihood of Development and Application of Intermediate Technology (DAPIT). Presently the consumption level of snails by Ghanaians is over 15,000 tonnes, however not even a quarter emanates from the country, about 13,000 comes from neighbouring Cote d'Ivoire.
These positive descriptions of snails and their economic value by experts have led to the snail farming rush in the country.
Individuals and members from different churches and organisations have inundated Margaret Sumah, from the Ministry of Food and Agriculture for professional advice on snail farming. She says that an average of three people call on her every week for information and guidance about snail farming.
“Last year, I talked to a group of 150 people, while churches and associations have called on me for assistance,” she said.
According to her, a farmer needs a small capital to enter the commercial snail farming business and must have between 150,000 to 200,000 snails. They can attract the service of three people but with encouraging earnings running into tens of millions of cedis when exported. Local snail farming can be started with as little as 50 snails and has the capacity of producing about 5,000 snails in three months, which is an additional income for the farmer.
Snail farmers always make huge profits during off season because in average about four snails in size which weigh between 100-150 grams can make profits of up to 50,000 cedis in the local market. In rainy seasons the same quantity can sell for as low as 5.000 cedis.
The challenge for Ghanaian farmers is to be able to make available 120- footer container every month to meet the maximum demand for the Europeans.
Snails have become popular dishes in Europe and France, were they feature very prominently. For instance, France imports the snails from Ghana and adds value to them for exportation elsewhere- mainly to other European countries such as the Netherlands, Belgium, Denmark, Turkey, Greece and Canada.
Brown has urged Ghanaians and other West African countries to take advantage of the large international market and growing demand for the snails, “adopt more improved scientific methods to harmonise the activities. It increases the yields and maximises the profits,” he said.