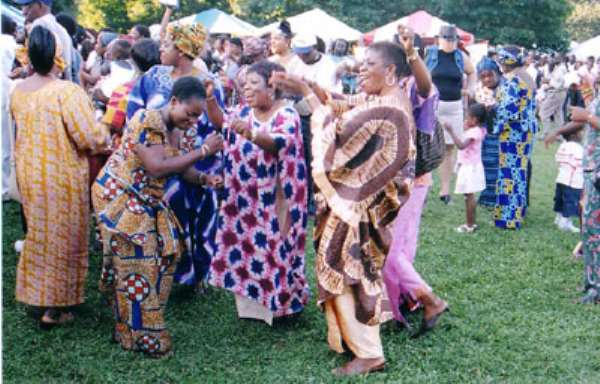 Since its founding more than five years ago, the AFRICAN SPECTRUM has been a regular sponsor of Ghanafest. As a community journal, it has always maintained a visible presence at this unique annual exposition of Ghanaian culture, which has become a summertime ritual in Washington Park. Each year the SPECTRUM was assigned a prominent spot at the festival site where its management did sales promotional work for the publication.

The SPECTRUM was literally snubbed by the executives of the Ghana National Council of Greater Chicago, the main organizers of the show, But for the generosity of Western Union, the international money transfer company, which gra­ciously offered to share its space with us, the Chicago Ghanaian community's sole mouthpiece would have been shut out of a Ghanaian cultural extravaganza taking place right here in Chicago. How odd! And for a reason that is ludicrously frivo­lous, in fact, childish.

The executives of the GNC had taken offense and desperately wanted to even the score following a decision by the editors of the SPECTRUM, which was made without any malicious intent, not to publish the pictures of the GNC offi­cials taken at a recent party marking the 47th anniversary of Ghana's independence. The GNU officials felt especially slighted because the photos of Jerry Azumah, the NFL star of Ghanaian ancestry who plays for the Chicago Bears and who was one of the guests at the function, were included in the publication while theirs were not.

But the decision to publish Azumah's pictures and not those of' the GNU executives was based purely on the recognition that, as an NFL star, Azumah provided an excellent public role model for our youngsters. By this statement, we do not however, seek to diminish or underrate the equally positive role models for our young people represented by other speak­ers and dignitaries at the Independence bash including the GNC executives, but having featured the GNC and published the pictures of the executives in this newspaper on numerous occasions we thought it would be appropriate to turn the spotlight on that particular occasion on another individual who has become a credit to his people and is unquestionably the pride of the Ghanaian Community in the Chicago area.

Incidentally, just so he could make his appearance at the Ghana independence anniversary party. Azumah, ever so proud of his Ghanaian heritage, had to sacrifice other important, probably more exciting, and certainly more lucrative engage­ments. Why would anyone begrudge this world-class sports figure a little pictorial exposure in a newspaper published by his own compatriots?

Evidently, the executives of the Ghana National Council saw things differently. And they proved it by making us, the management of the SPECTRUM, cool our heels for some two hours - yes, two long hours - as we tried to find some space to set tip on the day of the festival. As we stood around waiting, the powers-that-he in the GNC shuttled hack and forth on the festival grounds, holding little conferences here and there, snickering most of the time, obviously having the time of their lives at our expense. It was payback time in Washington Park. Eventually, they summoned the courage - or perhaps had the sense of courtesy - to inform us that there would he no place for us at the festival since we failed to rent space before hand. This claim was only partly true, to put it mildly.

While we may not have promised or paid any money by way of sponsoring the event as we had always done in previous years, we certainly tried to secure space to participate in the show as non-sponsors. Even at the eleventh hour, the night before the show, that the GNC people had magnanimously” confirmed that we could have a seat in the press booth. Thus, we set out for the show fully convinced that a spot had been reserved for us. We didn't just show up in Washington Park and expect to be seated without having reached any previous understanding with the organizers of the show. The GNC executives failed to keep their word because they were too consumed with the desire to exact revenge for an imaginary wrong.

So why didn't we at the SPECTRUM conduct business this year the same way we had always conducted it in the past, that is, by sponsoring the show as usual? The answer to this question, again, lies mainly in the vindictive attitude of the GNC people. Because the SPECTRUM decided not to publish their photos and chose instead to publish those of Jerry Azumah, the GNC executives, seemingly in a fit of anger, decided to cancel their regular advertisement for Ghanafest in this newspaper. It was the opening shot in their war of nerves against us. Not to be outdone, we duly returned the favor by with­drawing our routine and long-standing sponsorship of the festival. This childish move by the GNC has triggered a wave of callers to our establishment from some of our readers who are still wandering when Ghanafest would be held this year. They have always relied dutifully on this paper to find out from the previous years the date of the event.

Perhaps the most galling aspect of the whole unpleasant affair was that two out-of-state Ghanaian-owned publica­tions - one a website based in Atlanta and the other a Canadian-based newspaper - were allocated space in the press booth while Chicago's own publication was shunned and had to be rescued from its humiliating predicament by an American com­pany at the behest of a concerned executive who could not take the ridicule. Can anyone imagine such a thing happening in either Atlanta or Toronto? It could happen in other places too if the local Ghanaian community bosses happen to be cut from the same cloth as those in Chicago.

The GNC officials being partial to out-of-state media organizations wasn't the only questionable move on their part. Nepotism, one of the many faces of corruption, which is the bane of African societies, reared its ugly head at the festi­val. The wife of one of these officials apparently had no trouble at all getting a place to set up shop and sell her wares -Ghanaian pastries. And in the press booth of all places! A pastries vendor and a material (cloth) seller sat in the press booth while a legitimate news organization was denied access to it. It was a Ghanaian cultural show alright, and every aspect of our culture had to be showcased, including, yes, our dark, corrupt side.

The GNC belongs to all of us Ghanaians, if anyone needs to be reminded of this fact. Those who have been priv­ileged to lead the organization are not supposed to behave as if they were running their own little private enterprise where personal emotions can conveniently replace reason as a basis for deciding policy. Ghanafest 2004 will go down in history as the show where emotion triumphed over rational thought and made a bunch of grown-ups look very small indeed as they went to ridiculous lengths seeking revenge for the disappointment of not seeing their own pictures in a newspaper.

There's no sale of Government lands in Ho — Volta Region Lan...
38 minutes ago