Ghana will not be a one-party state -JAK 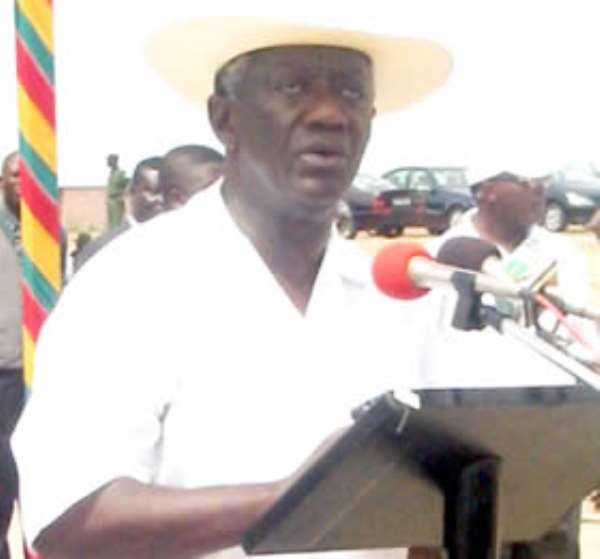 President J.A Kufuor has stated that the NPP governemt had no agenda of turning Ghana into a one party state. He noted that democracy thrived better in a multi-party political environment and called for support from believers in the ideals of good governance.
Addressing a well attended rally at the Jackson's Park in Kumasi in the Ashanti Region last Sunday to climax the NPP's three-day annual delegates' conference, President Kufuor said the government would not thwart the efforts of any political party to seek the mandate of the people.
He, however urged the political parties to let the ideals of good governance, the rule of law and respect for human rights reflect in their activities and expressed his abhorrence for those who pretended to be champions of those values.
In an apparent reference to criticisms that the government by its all inclusive policy, was bent on dismembering the other political parties, the President said the NPP government would not use its incumbency advantage to disorganize the two major political forces in the country.
He said the two major political forces, the Danquah/Busia and Nkrumaist traditions held the key to multi-party democracy in the country and not the new apostles of democratic dispensation, who during their reign did everything possible to destroy the two traditions.
President Kufuor again pledged to provide the type of leadership that would release the potential of all Ghanaians for productive work. He said it was the intention of the government to encourage all to work hard and benefit from the sweat of their labour.
President Kufuor said gradually the government was restoring the smiles on the faces of the people, noting that there was something good in the slogan, “Work and Happiness” which the NPP government was committed to.
The President said the policies of the government left him with not option but to adopt the HPC initiative, from which even critics of the initiative were benefiting. He said it was a bold decision he and his team took and thanked Ghanaians for their patience and understanding to endure the difficult period in the early days of the NPP regime.
President Kufuor said the reality of the economic situation at the time the NPP government assumed the reins of government was that the country was in the grips of poverty.
The President said the government had not only improved the economy but had also created the environment for everybody to express their views about public affairs. He said people no longer looked over their shoulders to find out who was watching them before even being critical of the government.
The President however expressed concern about the use of hate speech to score cheap political points, saying that the struggle for power did not give anybody license to insult others or engaged in a smear campaign against their opponents.
President Kufuor said no matter the lies and tricks that opponents of the government had decided to adopt during the general election, they would be given a resounding defeat at the polls
He said with the support of “party members and all well-meaning Ghanaians, the “elephant” shall triumph at the polls to give the government another mandate to implement its good policies.
He said the NPP had delivered a lot of the promises it made to the people in 2000 and asked the people to get copies of the book, “Positive Change so far so very good” which had captured the promises that government had fulfilled.
The Senior Minister, Mr J.H. Mensah asked the party supporters to preach the good news about the Kufuor administration saying that “tell those who cannot see to open their eyes and they shall see the good things. He said any honest Ghanaian could bear testimony to the good things that had been done by the government.