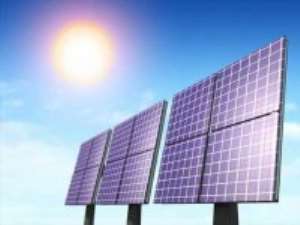 Over decades, fossil fuels were and are still being used as the major energy source for households, industries and service providers in Ghana and other parts of the globe. The share of (solar, wind energy) is 1% in Ghana. However, due to the limited amount of fossil fuels, energy is becoming more and more expensive in the country, and the consequence of their consumption is having an impact on our environment and climate emitting greenhouse gases causing global warming.

Ghana is located in the tropics and receives high levels of almost direct solar radiation daily all year round, and this constitutes a large untapped energy potential, ideal for solar-thermal, domestic and small industrial applications. Estimated solar radiation levels in Ghana are between 4-6 kWh/m2 during peak hours, enough to provide an economical and environmentally friendly alternative to conventional fossil fuel technologies in the country.

In light of the potential of the Sun: it rises each day unpaid and yet taken for granted. Few places in the world are also as blessed with such richness of sunlight such as Africa, and other continents. Why can’t we make good use of this free gift of resources which are infinite and will not extend regardless of the amount of consumption, are climate friendly, it is profitable when invested no toxic gas production and has no noise pollution?

Currently, Ghana is facing power crises with two to three days in the country being dark and technically termed “DUMSOR” which means “PUT OFF” and “PUT ON”. Ironically, despite Ghana being naturally blessed with numerous natural resources including energy resources, yet she is not being able to generate enough electricity to meet the growing energy needs and sadly finds herself in this unpalatable power crisis.

Ghana’s energy crisis has been largely driven by the high demand for power for both residential and commercial use as well as high operational costs among others, which accounts for the current power crisis being faced by the nation. The current crisis of inadequate and unreliable energy supply and the high costs to consumers can be curtailed by using alternative sources of affordable energy to support the country’s economic growth such as investing in solar since the technology is already commercially matured to deliver quality services for individual households and institutions in a sustainable manner which was widely implemented in Germany and other parts of the world.

This energy deficit has stunted the country’s development. According to Institute of Statistical, Social and Economic Research (ISSER), Ghana is estimated to lose about $2.2 million daily and between $320 million and $924 million a year in terms of decline in productivity and economic growth due to the current energy crisis facing the country and this amounts to between 2% and 6% of GDP annually which does not include indirect cost.

One of the most immediate and lethal problems also facing the country is the availability of clean drinking water especially in rural and other urban areas. Solar power technologies can help alleviate this problem with minimal cost using a combination of solar powered well pumping, a water tower or other holding tank and a solar powered water purifier. These technologies require minimal maintenance, have low operational cost and once set up will provide clean water for drinking and agriculture and as a result help to put an end to famine or drought in some parts of the country.

Ghana therefore needs to adopt solar photovoltaic Energy Systems to ease the perpetual energy crises, militate against the high energy cost and avert environmental hazards linked to fossil fuel. The looming energy shortage coupled with environmental problems, associated with the use of oil and gas must influence the nation to invest in a much-expanded clean energy supply like Solar Photovoltaic (PV) Energy Systems.

Even though Ghana has already started investing in renewable energy, but it is in a slow process. Aside from the Bui, Kpong and Akosombo Dams in Ghana, the first Solar Power Plant was introduced at Navrongo, in the Upper East Region of Ghana in May 2013. The people of Navrongo have already benefited from this reliable, renewable source of energy from cooking to heating water, serving as a source of lighting, residents in the Navrongo township have had their lives simplified by this technology. A look at other sub-regional countries such as Burkina Faso and Benin show solar energy have impacted their lives positively, especially in the course of irrigation.

Ghana needs to invest more into this eco-friendly natural source of energy to save her children and great grandchildren. Many steps needs to be taken and using renewable energy would mean the prices of electricity and heat would decrease, since the energy comes from an infinite source. Electricity would not only become cheaper, but also more regularly provided than at the current state. Also, it will save the country from its current power failure which has been collapsing businesses. Access to solar energy would enable Ghana to create better lives for its people-from lighting streets to reduce crime, providing electricity to manufacture local goods as well as cleaning and pumping water throughout the country.

Due to the dangerous and life threatening factors of fossil fuel in Ghana, it is high time the country invest in renewable energy, such as solar energy, windmills, hydropower or biomass energy. This shift to a “cleaner energy” would result from reduction of greenhouse gases and therefore mitigating climate change in the country. Ghana has vast resources for solar energy which should be exploited for the benefit of the country.

The Government should promote an industry-wide shift of investment and production in PV solar projects. From an industry perspective, this shift will help accelerate cost reductions and the attainment of grid parity, with the ultimate goal of enabling solar PV to become a competitive source of renewable energy- making it more affordable.