Buhari And The Politics Of Gay Marriage In Nigeria 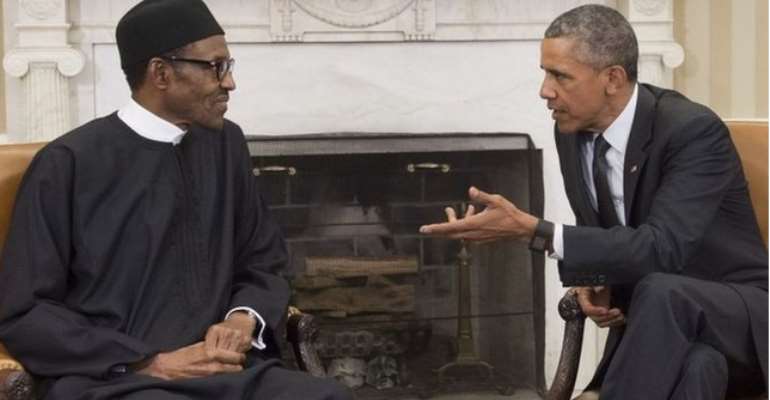 President Muhammad Buhari has stated during his recent visit to the US that his government would not consider decriminalizing gay marriage in Nigeria. Well, that did not come to me as a surprise because President Buhari is a hardline conservative muslim whom I think would be unwilling to support any legislative or policy change that is not compatible with sharia law.

Yes it would have been a real surprise if he had urged a policy shift towards a more dignified and respectful treatment of gay persons. That notwithstanding, the campaign for the recognition of the rights of gay people in Nigeria goes on because this campaign is not about what President Buhari wants. It is not about his interpretation of what is in accordance with ‘our culture’ or ‘our religion’ but about the rights of Nigerian citizens which are beyond the power of any president or state to deny. Yes it is beyond the politics of President Buhari to deny the human rights of Nigerian citizens on the basis of sexual orientation.

Buhari’s opposition to gay rights is more disappointing because this is a man who campaigned on the platform of ‘change’ and who distances himself from the policies and programs of his predecessor. Now it is clear that when it comes to homophobia and the persecution of gays in Nigeria, Buhari stands with former President Goodluck Jonathan, who signed the anti-gay marriage bill into law.

This means Nigerians who support the human rights of gays and lesbians and who are yearning for change and progress in the treatment of gays may have to wait for another presidential champion of change to provide leadership in this critical area. Yes, given his antecedents, nobody has expected Buhari to make a 'radical shift' on this human rights matter. But at least he could put in place a process that would eventually lead to a dignified treatment of gay persons in Nigeria. It is still not too late. This is how many countries have approached and are approaching the matter. Why should our approach in Nigeria be different? Why should the approach by the Nigerian government be inclined towards hated and intolerance of gays? What crimes have homosexuals committed?

Unfortunately, the Buhari presidency has decided to rehash the same meaningless argument which past governments have used to justify the legitimization of gay hatred and discrimination. They claim that gay marriage is against “our culture”. Now let’s think about this. When they say “our culture” which culture are they really referring to? Does Nigeria have ‘a culture’? Nigeria has many cultures. Moreover which culture in Nigeria endorses the killing and persecution of people with homosexual tendencies?.

Many of the practices which we identify as part of our culture today were not there decades and centuries ago because cultures change.

And if other cultures are coming to terms with such changes by recognizing the rights of gay and lesbian persons, why shouldn’t Nigeria do the same? If Nigeria cannot lead the way by legalizing gay marriage, why can’t Africa’s most populous nation emulate best human rights practices and treat gays with dignity? This is not too much a demand to make from a president who campaigned and won election on the platform of change.