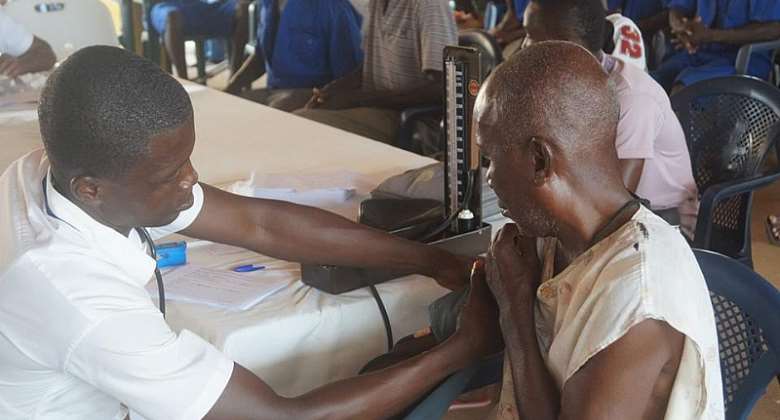 Many of Ghana's prisons do not have doctors or nurses assigned to them. Rather good samaritan medical personnel choose to donate their medical services to prisons. The Ghana Police Service has a Police Hospital and the Military has the 37 Military Hospital but their sister security organization— the Ghana Prisons Service which is also a part of the criminal justice system—does not yet have a hospital. What it has are mini-infirmaries which are poorly equipped and which are not manned by doctors. To compound matters, many of these infirmaries are near empty—with very little drugs in stock.

Owing to the over-congestion, poor ventilation, poor toilet facilities and other sanitary challenges, Ghana’s prisons risk becoming public health nightmares if something is not done soon. Air borne diseases can easily pass from inmate to officer, who can pass it on to the greater citizenry while they use public transportation. It is in the public’s best interest that prisons do not become incubators for disease. As such every person must work towards making the prisons healthier places.

Something as simple as donating soap or cleaning detergents could go a long way to improve conditions within prisons. Others can also donate towards Project Efiase—the 6th Prison Council’s initiative to raise funds for implementing prisons reforms while sensitizing the populace as to the plight of the Prisons Service. The funds generated will go towards funding the implementation of a 10-year strategic development plan to transform Ghana’s prisons into modern centers of reformation and rehabilitation.

Medical Mission
In the spirit of Project Efiase, on Joly 15, 2015, the chairman of the Project Efiase planning committee who happens to be a Prisons Council Member, Solomon Appiah,​ teamed up with a non-profit organization incorporated in Ghana—Malku foundation—founded and headed by Dr. Sharon Brown​ to organize a medical mission to the Nsawam Prison. They brought together local doctors, medical students and nurses to attend to the health needs of inmates. The team of 30 was divided into 4 stations—3 consultation stations and 1 dispensary. Even though it rained, the team worked through the rain.

The mission started round about 9:45am and concluded at 4:30pm by which time 341 documented inmates/patients had been seen, their ailments diagnosed and most given drugs as well as walking and seeing aids. There were others inmates who were not documented but received treatment all the same. Bar soaps were also handed out to inmates.

Some of the leftover medical supplies were left at Nsawam Prison. The remainder will be given to other prisons in the country.

The Nsawam Prison Administration led by DDP Rabbles was very professional and kind and assisted with the mission. Many thanks to prison officers who have given their lives to serve mother Ghana. God bless them & God bless the Ghana Prisons Service!

Turkey earthquake: Christian Atsu yet to be found
35 minutes ago