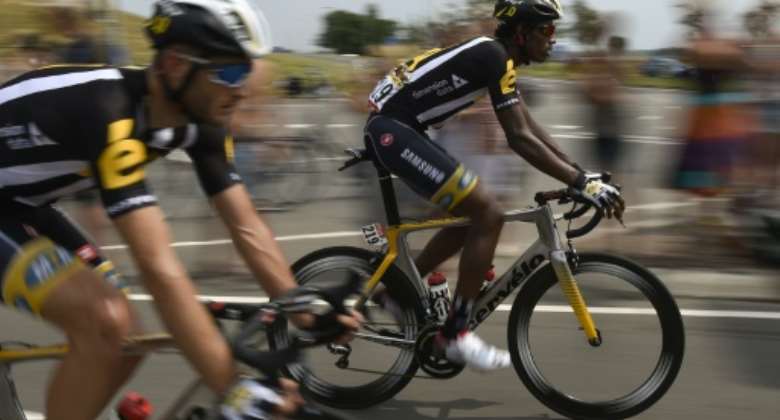 The 26-year-old Eritrean was part of a three-man breakaway on the 189.5km sixth stage from Abbeville to Le Havre and took all the climbing points on offer to claim the king of the mountains jersey off Spaniard Rodriguez.

Having already become the first black African to ride the Tour alongside MTN Qhubeka teammate and compatriot Merhawi Kudus, Teklehaimanot also became the first African wearer of the polkadot jersey.

"I am really happy to take the jersey. It is a big step for African cycling and I feel really proud at the moment because I have this jersey," he said.

"I am excited to be able to show my team's colours on the podium because we are trying to give 5,000 bicycles to African students -- being on the podium will help our project and I want to help make a difference for my African people.

"It was always our plan to get this polkadot jersey so I am happy we could do it.

Teklehaimanot is a talented climber who won the king of the mountains jersey at last month's Criterium du Dauphine, one of two week-long stage races alongside the Tour of Switzerland that are the main pre-Tour warm-up events.

After that he stated his aim for the Tour was simply to wear the polkadot jersey, even if only for a day.

"When I was young and watching the Tour de France, I was always more excited by the fight for the polkadot jersey than the yellow," he said.

"One day with this jersey at the Tour would be enough for me."

With only one mountains jersey point up for grabs on Friday's seventh stage, Teklehaimanot stands a good chance of holding onto the jersey as he leads Rodriguez by a point.