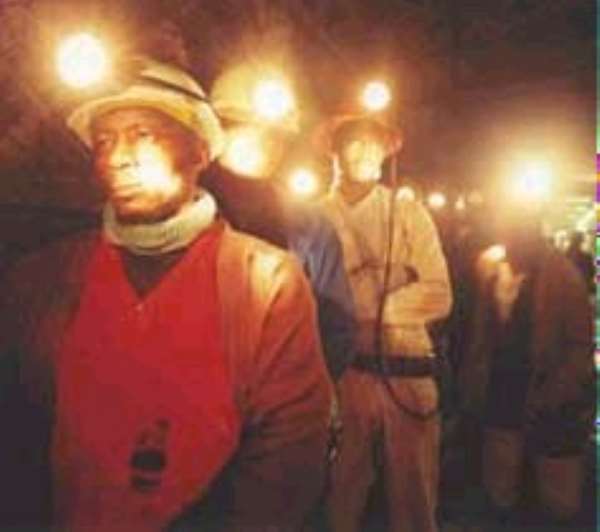 Bonte Gold Mines Limited a Canadian owned company has closed its Ghana alluvial operations along the river Bonte at Bonteso in the Ashanti Region. It took just about one week for the company to complete its liquidation process without following the due processes for mine decommissioning. Information gathered from sources close to the official liquidator of the assets of the company indicates that a High Court order was given on 25th March 2004 for the liquidation, which was subsequently executed on the 30th of March 2004. The workers have accused the company of keeping them in the dark about the liquidation and owing them unpaid wages. Farmers whose lands were affected by the operations of the mine also received no compensation and the company closed with debts of about US$18 million owed to various state institutions and private companies. Perhaps worst of all, the company closed without reclaiming or repairing the land destroyed by the operations of the mine.

The liquidation of the company raises a number of issues which point to negligence on the part of Bonte Gold Mines, policy and institutional failure, as well as industry rhetoric to environmental sensitivity and concerns of local communities. Ghanaians are entitled to ask how the company was able to liquidate:

1. Without following the due processes for mine decommissioning?

2. Without notice to the workers?

3. Without paying up-to-date wages to workers and compensation to farmers whose land has been acquired about 15 years ago for mining?

4. Leaving a debt of about US$18million owed to various state institutions and private companies? Lack of responsibility: The company closed without rehabilitating and restoring the site which stretches over 8km. This area, a mined-out site, is literally stockpiled with heaps of sand, gravel, and stones. The vegetation, as expected, has been cleared leaving the area bare and rendering it unsuitable for farming purposes. The area is littered with numerous settling ponds, which have become potential grounds for breeding mosquitoes and other water-born disease vectors. These ponds ought to have been backfilled to support regeneration, and also to improve the Essase and Jeni rivers from which the company drew its initial water for the alluvial operations. These problems constitute the legacy bequeathed to the local communities at the fringes of the mine. Faced with the degraded environment the local population resorted to small-scale mining on the abundant site further compounding the environmental problems.

The company also failed to post reclamation bonds to the Environmental Protection Agency (EPA) as required by law. The value of the bond owed to EPA is about US$2 million and indications are that EPA might not get the money because most of the company's property was leased. The Environmental Assessment Regulations, 1999, L.I. 1652 stipulates that an undertaking which a reclamation plan is mandatory shall be required to post reclamation bond based on approved work plan for reclamation. In addition to this the company is required to submit environmental management plan every 3 years. The company did not comply with the law. Its failure demonstrates a significant failure on the part of government regulatory institutions, in particular the Minerals Commission, the EPA and the Mines Department. Victims of the closure: The closure of the mine seems to have been done through the back door and has left government regulators and over 400 workers of the company stranded in the dark. According to a source close to the official liquidator, the workers reported to work on 30th March, 2004 for their usual routine work only to find that the gate to the premises was sealed off. The workers were told there and then that the company had been liquidated. As expected, this sparked-off strong protest and agitation from the workers. The Ashanti Regional Security Council a state apparatus in charge of security matters in the region had to call in police and soldiers to contain the situation. The source disclosed that the Canadian management notably Mike Carwood an executive member of the Chamber of Mines and Managing Director of the defunct company and Douglas Mills the Operations Manager of the company left the country immediately following the court's verdict. The workers directed their anger at the Ghanaian managers who were the only management personnel at the site. They were almost lynched by the workers when the news of the closure was disclosed to the workers. It took the liquidators and the security people a hectic time to rescue them and to usher them to safety. The last brick of bullion with market value of about 2 billion cedis which was about to be shipped was seized from the company to pay the workers' outstanding salaries. The value of their severance package has not been determined.

Local farmers affected by the operation of the company have not been compensated for their destroyed farms. The company had issued cheques to the farmers at the time that the court decision was made, however the liquidation decision was communicated to the company's bankers who froze their accounts. Farmers who were issued cheques for their destroyed farms could therefore not cash the cheques. Similarly, the workers of the company were not informed let alone have their entitlements paid. Even though three month notice was a requirement in the policy manuals of both the workers and the company, the company did not fulfil this requirement. The farmers and some of the workers are wondering whether the state institutions that failed them can still help them to get their money, or if the Chamber of Mines can fulfil its rhetoric of self-regulation. The farmers are threatening to demonstrate but for the presence of security personnel in the area.

While the workers and the farmers lament over their future livelihood, the management of the company have long left for Canada home of the defunct Bonte Gold Mines Limited. They did not wait to effect the court's decision. This is a typical case of how the nation is being raped of its natural resources only to be abandoned after they are completely exhausted.

Meanwhile the defunct company has left behind a debt of about USD18 million owed to various state institutions and private companies. This amount includes US$2million reclamation bond which they were suppose to lodge with the EPA towards rehabilitation of the mine after closure which they never paid; and workers' entitlement of over ¢18 billion. The rest of the debt constitutes outstanding payments to the Internal Revenue Service (IRS), Electricity Company of Ghana (ECG), Total Ghana Limited, among others. It is very unlikely that the debt can be recovered as the company operates largely on leased equipment. Apart from the operating plant, its own machines and equipment are almost at scrap value. Many of the lessees have come for their equipment. Yet this was a company which retained about 60% of its total earnings in off-shore accounts and that it justifiably did so like most mining companies in the country in order to purchase equipment that are non-existence in the domestic economy.

Wake up call to regulators and state institutions: It is alleged that the company closed because it was not making profits and its operational cost was rising. Contrary to this claim, sources indicate that Bonte Gold Holdings had acquired two concessions, one in Ghana the other in Peru. The Ghana concession namely “Golden Ray Limited is at Kwabeng near Akyem in the Eastern Region. The two major share holders (Mike Carwood and Douglas Mills) of Bonte Gold Mines among the management who left Bonteso to its fate are trying to obliterate any legal links between Bonte and Golden Ray so that it would not be affected by the liquidation process. The two namely Mike Carwood Managing Director and Douglas Mills Operations Manager both Canadian were the two most senior management staff of the Bonte Gold Mines.

The Chamber of Mines, which trumpets the virtues of the mining industry and argues for voluntary regulation is quiet about the plight of the workers, affected farmers and the environment. Since the liquidation in March 2004, no official from the Chamber has visited the site to learn about the plight of the workers and farmers, as well as the state of the environment. The inability of the Chamber to hold the company accountable for its obligation towards the workers, farmers, and the environment is proof that the Chamber's call for self-regulation (voluntary code) is empty rhetoric. The Board of the company has shown similar indifference, at least in the process of liquidation. It is amazing that the Board of a company could have supervised such a rapid, an ill planned and executed liquidation. The workers, affected farmers, the community, and the state as a whole have received a raw deal in this liquidation. The workers need their entitlement to continue life. The farmers have waited far too long for their compensation and the sudden liquidation seems to have dashed their hope of ever receiving anything. At the same time their environment has been destroyed thereby limiting their choices of alternatives to livelihoods. The state due to its own monitoring weaknesses has helped the company to side step both its financial and environmental obligation.