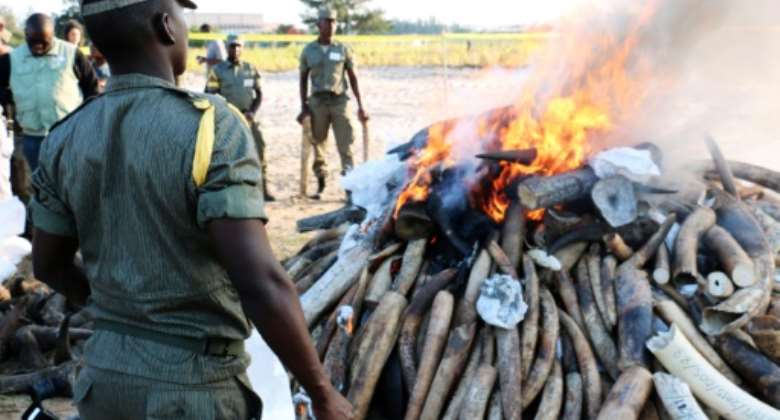 Mozambican authorities stand near a burning pile of ivory and rhino horns in Maputo on July 6, 2015. By Adrien Barbier (AFP)

"This is a very clear signal the government is sending to society and the whole world on the degree of tolerance we have towards poaching," Environment Minister Celso Correia said after setting fire to the haul.

It was the first time that Mozambique destroyed illegally gotten ivory and rhino horns, following in the footsteps of Kenya and Botswana, who have also torched heaps of ivory recently.

In May, police seized 340 elephant tusks and 65 rhino horns, the country's biggest find of wildlife contraband.

Mozambique is also used by poaching syndicates as a recruitment ground for rhino poachers, whom they send to attack rhinos across the border in South Africa's Kruger National Park.

Rhinos are extinct in Mozambique itself.

"This is also a message addressed to the networks of organised crime, that crime doesn't pay," said Carlos Serra, a wildlife activist.

Maputo has been slow to take the fight to poaching. Under international pressure, the country in June 2014 adopted a new biodiversity law criminalising the killing of protected animals.

Ivory and rhino poaching is driven by demand in Asia and the Middle East, where the tusks and horns are used for ornaments and in traditional medicine.

Wildlife groups estimate that the population of African elephants has dropped from millions in the mid-20th century to about 600,000 today.