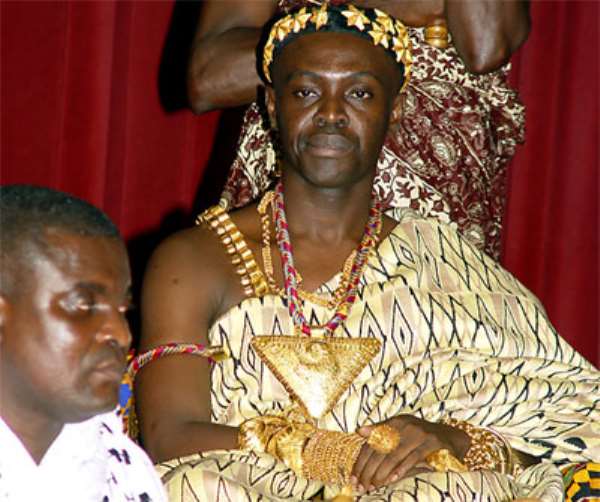 The Dormaahene, Oseadeyo Agyemang Badu II, has cautioned ministers and other government functionaries to be mindful of their utterances, because such statements could jeopardize the peace the country was enjoying. Oseadeyo Agyemang Badu noted that if the government preached peace, whilst some of its officials turned around to make unguarded utterances, it would squander the efforts the government was making to attain peace.

He, therefore, advised those ministers and their functionaries to desist from making such statements that could lead to any breach of peace in the country, because they were the role models of their followers.

The Dormaahene, who was contributing to the third annual general meeting of the Brong Ahafo Regional House of Chiefs (BARHC), held in Sunyani, Wednesday this week, advised the government that issues that bordered on the security of this country should not be hurriedly brought to the fore of the public, because it normally created panic in the system.

The Paramount Chief made reference to the recent coup scare allegedly published by a Liberian newspaper and some local media.

He was of the view that the circulation of such news prevented potential investors from investing in the country.

The coup scare, according to the Dormaahene, is purely a security issue and for that matter, did not need to come out with it to scare the public.

Oseadeyo Agyemang Badu appealed as well to the government to expedite action on some roads in the region and this included the Techiman-Kintampo, Berekum- Sampa and Dormaa- Gonno Krom roads to ensure easy transportation of persons and goods.

Welcoming the chiefs, the President of the House, Nana Kwadwo Nyarko III, also the Paramount Chief of the Prang traditional area, lamented the spate of chieftaincy disputes emanating from the region.

According to Nana Nyarko, the number of cases in Brong Ahafo had now increased from 45 to 48 cases.

He said efforts to get a permanent counsel for the house to dispose of the cases was yielding no results.

The president told the chiefs that the house could not give up the cases and therefore appealed to his colleagues to team up to solve the disputes. He suggested a special committee to handle the cases.

Nana Nyarko disclosed that mostly, the disputes related to the occupation of divisional stools.

Following this, he appealed to the paramount chiefs from whose jurisdiction such disputes emanated to set up mediation committees to help them resolve them in peace.

Nana Nyarko reminded the house that the chieftaincy research project which was instituted to research into problems affecting the instalment of paramount chiefs, under taken by the chieftaincy division of the Office of the President was still on-going, asuch, those chiefs whose questionnaires were not completed, must expedite action on them.

He said so far, only ten traditional councils had submitted theirs in the region.

According to him, after the completion of the research work, it would be forwarded to parliament to be passed into law and this would have all chiefs abiding by the law.

He disclosed that the Ghana AIDS Commission had approved ¢400 million for the National House of Chiefs (NHC) to enable traditional councils organize sensitization programmes on the dangers of the HIV/AIDS menace.

He said ¢ 200 million of the amount would soon be released to the NHC and each tradition selected would receive a ¢ 0 million.

He, therefore, implored interested traditional councils to apply directly to the NHC.

The deputy minister noted that some people wanted to hide behind the chieftaincy institution to cause trouble and according to him, the law would drastically deal with such troublemakers.

Mr. Duffour advised the chiefs to use the laid down procedures to resolve chieftaincy disputes to avoid all acts of vandalism. He cautioned that the government would not sit unconcerned and allow such chiefs to disturb the peace the country was enjoying.

He said the Regional Security Committee had tasked the police to strictly enforce the Public Order Law.