NDC told to go and sleep 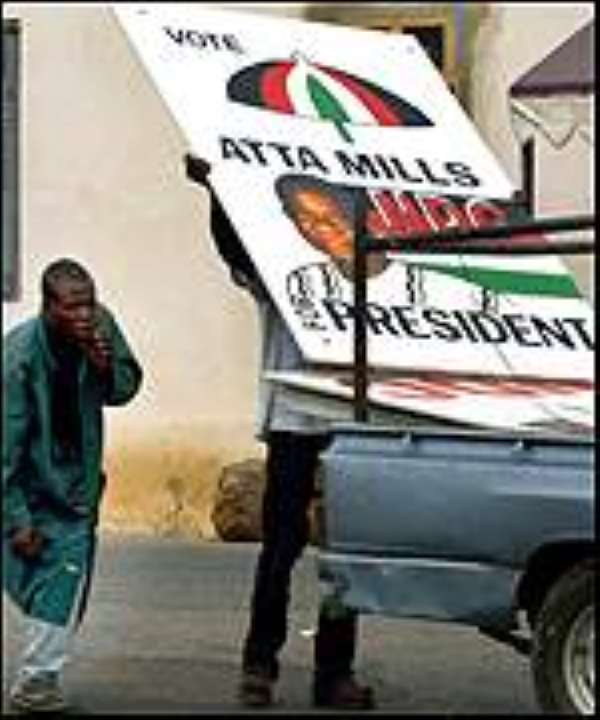 A Lecturer at the Political Science Faculty of the University of Ghana, Legon and Research Consultant, Professor Yankan Bediako has asked the opposition National Democratic Congress NDC to start strategizing towards the 2008 elections, because the ruling New Patriotic Party (NPP) “has already won the December 2004 elections.”

He also advised the fragmented Nkrumaist parties to forget about any election victory in the history of this nation if they could not unite as one Nkrumaist party or tradition.

Professor Bediako made these predictions in an exclusive interview with The Chronicle yesterday on his professional opinion about a recent survey conducted by the Institute of Economic Affairs (IEA) on the pre-election popularity of political parties in the country.

The IEA in December 2003 conducted the survey to ascertain the popularity of political parties towards the December 2004 elections.

The survey report, which was published in May this year, stated categorically that the ruling NPP would win both the presidential and parliamentary in the forthcoming elections, having made a major inroad into the Upper East, Upper West, Northern and the Volta regions hitherto dominated by the NDC.

Describing the IEA research as scientific and professional, Prof. Bediako said it was therefore the true representative of the opinions of the Ghanaians voters, which “cannot change in the short to medium term”.

He explained that due to certain permanent factors, voters in developing countries did not change their voting pattern as compared to those of developed countries such as America and the UK.

He identified such factors as including ethnicity, social class, age group and high rate illiteracy.

Prof. Bediako said he was privy to a survey report of certain institution (name withheld), which tested the popularity of the NPP government. “ I can tell you the ruling party's popularity has not waned a bit; they have become even more popular since winning the 2000 elections”.

He said, for example, the report stated that in terms of good governance people were satisfied in areas such as freedom of expression, freedom from arbitrary arrest and freedom of association for which the government scored between 70% and 80% marks.

Other areas, which the respondents were satisfied with, included the improvement of the economy and the living standard of the average Ghanaian.

The government, however, scored average marks of between 50% and 60%. Two major areas, which the respondents were not satisfied with, were corruption and tribalism.

He explained: “I was not surprised about the way people perceived the NPP government as corrupt because the transparency international has already rated Ghana as one of the corrupt nation in the world in its survey published this year”.

He said the major task that would be facing the government after the forthcoming election, which he said, was a forgone conclusion was how it could device pragmatic policies to radically fight corruption both in the public and private sectors.

The government must also find ways of convincing Ghanaians and the other chiefs that the presidency and government were not meant only for the president tribesmen.