We Too Are Greece! 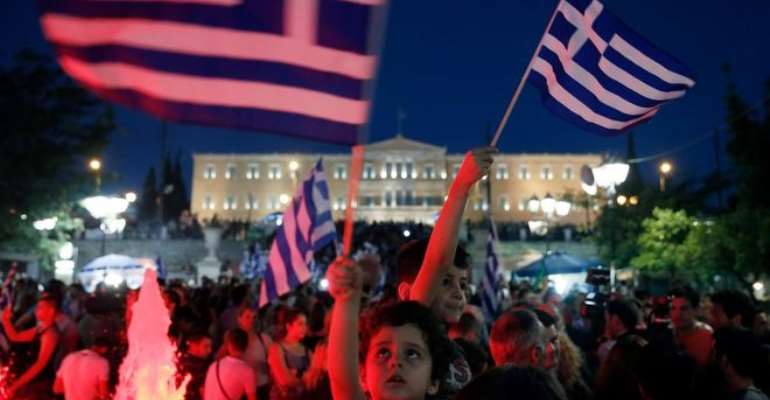 Kudos, first of all, to Alexis Tsipras, for standing up for his people, and for showing his maturity in that which we call democracy. Our politicians in this part of the world should take a cue from this situation. It will do us good. It’s not every day that we see such a great leader.

Any serious government would seek progress in her country. Some put people first. Others put money first. The latter are usually more than the earlier hence, the make it look as if putting people first is a crime. But as Jesus Christ in the Holy Bible (Mathew 16:26) asks “For what will it profit a man if he gains the whole world and forfeits his soul? Or what will a man give in exchange for his soul?” and in Luke 9:25 “For what is a man profited if he gains the whole world, and loses or forfeits himself?”

Most people work hard to make ends meet. A large part of our country’s people still lack portable water, good education and quality health. The same is true for others in our continent and the world over. Some people get some access to these things but not the desired quality. Looking back into the past, the fight against these problems hasn’t been won yet, and very little progress has been made. Why?

Some of us insist that institutions like the International Monetary Fund (IMF), the World Bank etc. are of no benefit to us, the people. They come to give us policies that in the short, long and medium term do not benefit the people in any way. It only makes money grow for the multinational companies who are only interested in money. They don’t care if the money is reaped from the hands of a beggar on the street, from a baby suckling on her mother’s breast or from the coffers of hospital.

Our country has earned less from crude oil etc. this during this last year especially, because world crude oil prices have reduced by half. Yet fuel prices in Ghana are increasing! What explanation does the government have for this? It is obvious the dark forces of Neocolonialism have a hand in it, the same ones against which Kwame Nkrumah fought us against.

All of a sudden, government wants more taxes, except from the National health insurance levy. Salary increments have been frozen, and non-essential sectors of our economy have also seen a freeze to the addition of new jobs. The National Health Insurance Scheme and the Ghana Education Trust Fund (GETfund) are having serious problems with their finances, simply because they benefit the Ghanaian people directly but the capitalists (those who choose money over people) do not like this so some way somehow they do their thing.

The sad part of all this is our leaders do not learn from our history and that of others. During the era of the slave trade, some of the native people in Africa helped the Europeans to capture and ship off their own people (our people). Today, people are not sold as they were in the past (physical slavery). Today, it’s softer in approach, to achieve the same results: money in the pockets of a few, and while the rest suffer hardship. What we call in our part of the world “monkey dey work, baboon dey chop”. The IMF and her friends, monitor every country, seek the vulnerable ones and impose unfavorable economic policy on them, just like vultures do with helpless animals. The local politicians play the role of those who sold their own to the Europeans, depending on whether they have any sense of dignity and pride for their nation, or not. Those without any dignity “sell” out their country to multinationals/IMF etc.

If these countries accept, the policies benefit multinational cooperations and a few local politicians but never the people. If they do not accept, they get blackmailed, just as a Greece under Tsipras is suffering. People declare their countries independent and sovereign for a reason you know, to make their own decisions the manner they think best suits them.

We have economist and analysts in our country, don’t we? Well, with these there are two kinds: one group that accepts everything they read in the books that come from the west without criticizing anything in it (as we are made to believe the best comes from the west). And another group, the minority, who adapt economic policy to solve their problems. Tsipras and his team are of the latter. A rare breed that chooses with dignity and pride, to stand by their people as they seek the solutions to their problems.

You know, all this tax increases, taking off subsidies, laying off workers, reducing pensions, privatizing State Institutions at the long run will not benefit us, the people. This is not too hard to comprehend. Shortchanging is something we all can recognize, especially when we’re the victims. We live in the 21st century. The same old tricks employed by these vulture-like institutions will not be allowed to work this time. We, the people, will stand up and defend what is ours. We do not need lessons on economic policy or on democracy from anybody. We have come of age and we know what is good for us and what is not.

Carry on Tsipras, and the people of Greece. Defend your sovereignty and your national pride. We are watching and learning from you. We stand by you!