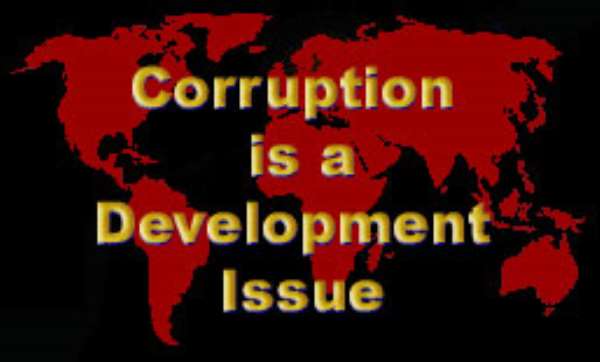 Accra, Sept. 9, GNA - The Ghana Centre for Democratic Development (CDD-Ghana) on Thursday said it has established that there was existence of high perceptions of corruption in Ghanaian politics, lack of transparency and accountability among political parties.
This was the outcome of a nationwide survey conducted CDD-Ghana in collaboration with National Democratic Institute (NDI) between May 20 and 28, 2004.
Briefing the media in Accra, Dr Baffour Agyeman-Duah, Associate Executive Director of CDD-Ghana said the survey also established that the main reason for donating to political parties was for the individual to gain personal favours, kickbacks, win government contracts, and gain political appointments.
He said large number of the respondents agreed that they would take cash or goods offered to influence their vote, this according to CDD-Ghana "is dangerous for the democratic development of the nation". Dr Agyeman-Duah challenged the political parties to launch an educational campaign to build public confidence for funding and to wipe out the perception that politics "is a moneymaking exercise".
He said Ghanaian political parties enjoyed a reasonable amount of popular public goodwill and support although this "appears not to run very deep".
He said the prevailing situation of high levels of popular party identification, but low card-holding membership of parties suggests weak actual commitment of Ghanaians to political parties; that might reflect the weak popular support for state funding.
Parties must therefore, work hard to translate the vast latent support into actual and active one since the public also holds poor perceptions about the parties' organization and conduct. He said internal party reforms might be one of such methods to increase support for parties.
Dr Agyeman-Duah called for the creation of the necessary environment for public support and confidence for state funding. A recommendation could be that the political parties team up with appropriate public and civic bodies to educate the public on their actual functions and roles.
It is important that the public recognise that competitive and viable political parties are key players in the democratic governance of the country, and that politics should not be seen as a moneymaking exercise.
Parties must also demonstrate high levels of transparency and accountability, and anti-corruption measures, to enhance public confidence. There needs to be a positive shift in behaviour and attitudes, among both the public and the political parties.
He suggested that parties must do a lot more to correct any erroneous impression that they wanted to get cheap and easy money from public coffers, Dr Agyeman-Duah said, "Parties must also endeavour, through their actions and public education, to convince the public about efforts they are making to be self-supporting through legitimate fund-raising". He urged the parties and the state to explore other legitimate means for sourcing state financing - "a fund for parties that is generated through donations and contributions by the private sector, organizations and individuals.
He said the survey also established that the public is sympathetic to the idea of foreign funding, it may be self-defeating to insist on the retention of the present law excluding non-Ghanaians from contributing to party funds.
However, stakeholders of Ghana's democracy could reduce the funding handicap by working actively with public and non-public anti-corruption institutions currently monitoring and checking over-exploitation of incumbency (abuse of state resources) and the abuse of resources in general by political parties and their officials.
If successful, such efforts will help to equalise opportunity and access to resources vis-=E0-vis the ruling party.
Rightly or wrongly, the public holds strong perceptions of high levels of corruption, and low levels of transparency and accountability amongst political parties. The parties must recognize these perceptions and take steps to correct them through reforming their structures of accountability and transparency.
Parties should adhere to codes of conduct and ethics, particularly during election campaigns; they should be held accountable for any breaches of conduct.
They should also increase transparency in their financial affairs, and cooperate with the Electoral Commission to enable it to undertake its audit duties.
Monitoring of the parties by the EC and civil society should be strengthened to ensure compliance with existing laws.
The survey was conducted by CDD-Ghana in collaboration with National Democratic Institute, a US-based non-governmental organisation as part of the African Political Party Finance Initiative. Two parallel surveys, the elite and the mass were conducted to seek opinions on political party finance.
The elite survey interviewed 90 respondents, including party executives at the national, regional and constituency levels while the mass survey targeted a nationwide randomly selected sample of 600 respondents aged 18 years and above. The margin of error was five per cent