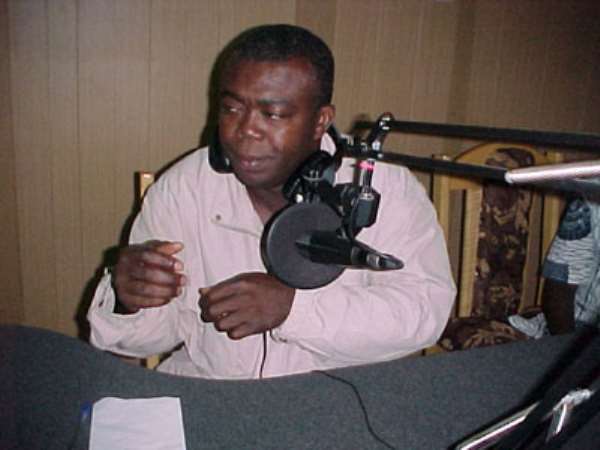 Bawku, Sept 9, GNA - Government has no intention to increase price of petroleum products in the country, Mr Stephen Asamoah Boateng, Deputy Minister of Information has said.

He said even though crude oil prices on the world market have been on the hike in recent times mainly as a result of the war in Iraq and panic buying, Ghana's economy is well cushioned to absorb the resultant shocks and distortions.

Mr Boateng was responding to a question during his interaction with workers at the Bawku Municipal Assembly on Tuesday, as part of his two-day working tour of the Upper East Region.

The questioner, a librarian at the Bawku Community Library, has asked for explanation a story he had read in a private newspaper in Accra the previous week, to the effect that government intended to raise fuel prices in February 2005 if the New Patriotic Party (NPP) was returned to power in the December general election.

The Deputy Minister explained that with recent increases in national revenue due bumper harvests of cocoa, increased gold production and remittances from abroad, among others, the economy was smooth-sailing and that government did not find any need to tax Ghanaians to pay for imported crude oil.

Mr Boateng dismissed the story in reference as politically-motivated, and cautioned Ghanaians to be wary of the messages they received from political opponents of the ruling government, especially in an electioneering period.

"You have to take time and digest such messages carefully so you can discern what is true from vicious propaganda," he counselled.

He said as a descendant of the Progress Party, the NPP believes in democratic principles and would not manipulate the forthcoming election to stay in power. "Our achievements in the past four years are visible everywhere, and we believed that the people of Ghana in their wisdom will return this government to power in December for us to accomplish our development agenda.

Other concerns raised at the forum included high school fees, the dilemma of assembly members whose electoral areas now fall under newly created districts and the reintroduction of CAP-30 for retired civil servants.

The issue of CAP-30 had also come up at a similar forum the Deputy Minister had earlier held with workers at Bongo. He declared that no government anywhere in the world could implement CAP-30 on a sustainable basis.

Mr Boateng announced, however, that government had plans to introduce an alternative scheme, the Long-Term Savings Plan, which, he said, would adequately address the retirement needs of public servants. He explained that the Plan would enable workers to acquire basic requirements including houses, cars and capital to set up businesses even before they proceed on retirement.

He acknowledged the crucial role of public servants in the rural areas, through whose selfless sacrifice the implementation of government's programme in such areas become possible. Citing the introduction of the President's Special Initiatives as evidence, the Deputy Minister reiterated government's determination to develop the rural areas to bring them at par with the urban centres.

Other issues raised at the interaction with workers at Bongo were delays in the on-going Bolgatanga-Bongo main road project, the extension of telephone communication to Bongo District, and an improvement of the transportation system between Bolgatanga and Bongo for the benefit of worker resident in Bolgatanga who have to commute the 20-mile return trip daily.

Mr Boateng earlier visited the Bo-Naba's palace to pay a courtesy call on the Chief Linguist of the Bongo Traditional Area, Ayeea Atubda, who currently represents the Bo-Naba pending the enskinment of a substantive chief for the area, following the demise of the Bo-Naba.

15 Assembly Members, others granted bail for cursing Regiona...
52 minutes ago

I wanted to turn down Accra Regional Minister job because I ...
58 minutes ago