Spiritualism: The Bane Of Ghana’s Development 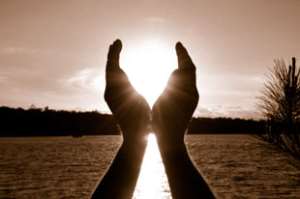 Abraham Kaplan was right when he observed in 1964 that: “Give a small boy a hammer and he will find that everything he encounters needs pounding”. A related maxim also goes like this: if all you have is a hammer, everything looks like a nail. Yes, everything thing looks like a nail that needs to be pounded because the only tool you have and can conveniently use is a hammer. These aphorisms stated above perfectly fit the situation of Ghana and Ghanaians. All that we have got is spiritualism---belief in spiritual forces-- and we don’t miss any opportunity to invoke same in solving the numerous challenges bedevilling us. We live in a country where everything has a spiritual connotation. These range from everyday challenges such as the cause of illness, the cause of deaths, the cause of annual flooding in our capital, the cause of our erratic and irregular energy supply which has been christened as DUMSOR to the cause of the depreciation of our local currency, the Cedi. In effect, no other factor is responsible for why we are where we are save for spiritual forces.

In the Twenty-first (21st) Century when the force of progress and advancement is science and technology, where people visit the moon to send holidays, when at the click of a button one will know what’s happening all over the world, Ghana is still in the era of troglodytes. With this Neanderthal mindset and thinking, can we find any space to compete in this globalised world? Any wonder that we are centuries behind our contemporaries? Any wonder that we still believe in witchcraft and have put up camps for the alleged witches? Any wonder that no one dies a natural death in Ghana even if the person is as old as Methuselah?

On Friday the 26th of June, 2015, ghanaweb.com carried a story sourced to the “Daily Guide” that the Volta River Authority (VRA), operators of the Aboadze Thermal Power Station, paid a humongous amount of Twenty-four Thousand, One Hundred and Five Ghana Cedis (GHc 24,105) to the chiefs of three communities in the region for the construction of a shrine for the river god in the area. You may be wondering why I am describing the amount as humongous. It is humongous because we are in an era where every Pesewa counts not only to the individual consumer or household but to the economy as a whole and therefore government would tax and even tax the last Pesewa. The chiefs who own the land on which the Aboadze Thermal Plant is built asserted that the T3 Power Plant generators would never work again until the gods in the area had been pacified. I was metagrabolised and gobsmacked, to say the least. How can the managers of the nation’s energy sector dole out such an amount of scarce financial resources in the face of all the economic difficulties to pacify spiritual forces?

You see the case of having only a hammer and using same to solve all our problems? In this Twenty-first Century when science and technology should be the driving force of development, we are still stuck in this backward thinking. Not long ago, the former Women Organizer of the National Democratic Congress (NDC) and former Deputy National Coordinator of the National Disaster Management Organisation (NADMO) attributed the continuous depreciation of the Cedi to the forces of dwarves. In a related development, Archbishop Duncan Williams offered special prayers for the recovery 0f the cedi from the path of depreciation. These individuals were pooh-poohed and lampooned for their rather visceral understanding of monetary economics. Earlier last year, the Minister of Energy and Petroleum requested Ghanaians to pray for heavy rains so that the water level of the Akosombo Dam would increase to enable the hydro-electric plant generate power at full capacity. That was supposed to be his answer to a question how the energy problem could be resolved. As for the cause of the June 3 twin disaster of flood and inferno, the Ga Traditional Authorities have already dealt with that and wouldn’t like to repeat that.

In all these cases adumbrated above, our leaders in charge of policy decisions are clearly bereft of any policy ideas to move the nation forward. How on earth will an engineering problem transmogrify into a spiritual one just as we do give spiritual connation to our economic challenges. Assuming arguendo, that the payment of the GHC24,105 is the elixir to the challenges facing the T3 plant, I humbly propose that spiritualists be appointed to head our public institutions including the Presidency. I will not propose same for private institutions because the private institutions, unlike the public ones, know what they are doing. Since spiritualists see beyond what the ordinary eye can see and they are in constant communion with the spiritual forces, it would be prudent to make them the managers of our national affairs and all these challenges confronting us will disappear overnight.

Our embrace of spiritualism has made lazy in our thinking as we tend to look at a things from the spiritual dimensions much to the neglect of the use of our mental faculties. The time to make use of our mental faculties is now, that is if we want to make any progress as a nation. I humbly suggest that those who facilitated the payment of the said amount to appease the river god be surcharged. We cannot continue wasting scarce resources on such frivolities when there are numerous pressing needs to be met.

Lead by example, don’t also travel abroad for one month – Ab...
36 minutes ago